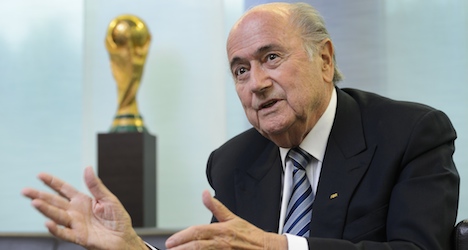 Blatter gave his first reaction to the arrest of seven officials in Zurich as part of a US corruption probe with Fifa provisionally banning 11 people over their alleged involvement in the scandal.

“This is a difficult time for football, the fans and for Fifa as an organization,” he said in a statement.

“We understand the disappointment that many have expressed and I know that the events of today will impact the way in which many people view us,” he said.

“Let me be clear: such misconduct has no place in football and we will ensure that those who engage in it are put out of the game,” added Blatter who is standing for re-election on Friday.

The Fifa chief welcomed the investigation by US and Swiss authorities saying “it will help to reinforce measures that Fifa has already taken to root out any wrongdoing in football.

“While there will be many who are frustrated with the pace of change, I would like to stress the actions that we have taken and will continue to take.”

Blatter said Fifa had asked Switzerland's attorney general to investigate the award of the 2018 and 2022 World Cups to Russia and Qatar respectively.

“We will continue to work with the relevant authorities and we will work vigorously within Fifa in order to root out any misconduct, to regain your
trust and ensure that football worldwide is free from wrongdoing,” said Blatter, who faces mounting pressure over his leadership.

Argentine football great Diego Maradona on Wednesday applauded the arrest of top Fifa officials in the anti-corruption sting, and warned that Blatter may be next.

Maradona said he was “enjoying” the news of the arrest of the officials in a dawn raid at a luxury hotel in Zurich.

They face deportation to the United States on charges of accepting more than $150 million in bribes, and the outspoken former star said Blatter could follow in their footsteps.

“Watch out, Blatter may have to go the United States to explain himself,” he told Buenos Aires radio station La Red.

The crackdown came two days before Blatter seeks a fifth term as the head of the multi-billion-dollar organization.

Maradona has a long history of scathing attacks on Blatter dating back to the 1986 World Cup in Mexico, when he protested the decision to schedule matches in the midday heat.

He has lobbied against Blatter's bid for a new term as Fifa president, writing in the Telegraph this week that he had become a “dictator for life” and the organization “a playground for the corrupt.”

“I have been saying this for a long time,” Maradona said on Wednesday.

“They said I was crazy. Today the FBI spoke the truth,” he said.

“We'll have to see if Blatter wins after this — the Americans did an impeccable job,” he added.

Maradona, 54, was considered the greatest player of his day, playing in four World Cups and leading Argentina to victory in 1986.

Blatter faces an unprecedented challenge from Fifa vice president Prince Ali bin al Hussein in Friday's vote while European football leaders have stepped up their criticism of the Swiss leader.

The Swiss-based Union of European Football Associations (Uefa) on Wednesday called for Friday's Fifa meeting and the election of the president to be postponed to a later date.

“The members of Uefa's executive committee are convinced that there is a strong need for a change of leadership at Fifa and that the congress of Fifa be delayed with a new election for the presidency organized in the next six months,” said Gianni Infantino, Uefa secretary-general, Swiss news agency ATS reported.

Uefa also issued a statement on its website giving Fifa the red card, calling Thursday's events a “disaster” that tarnishes the image of football as a whole.

“There is a need for all of Fifa to be rebooted and for a real reform to be carried out.”