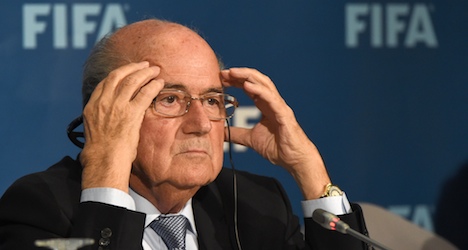 Newspapers in Switzerland, fed up with the corruption scandal and the black eye it has given Switzerland through the international media, have been openly critical of Blatter, a Swiss citizen, originally from the canton of Valais.

Le Matin, the leading daily in French-speaking Switzerland, ran a front page headline shouting “He must go!” last Thursday as Fifa’s 65th congress got under way in Zurich.

The paper argued that he had no credibility after seven top Fifa officials were arrested by cantonal police at the request of the US justice department at the luxury Baur au Lac hotel in Switzerland’s largest city.

But Blatter’s re-election as leader the following day seemed to temper attitudes and German-language Blick, the biggest circulation paper in the country, wrote an article critical of the US justice department’s “cowboy tactics” with regard to the arrests.

It questioned why three New York Times reporters were sitting in the lobby of the hotel, apparently tipped off about the arrests, while Zurich police were unaware of their presence.

This all seemed to give credence to Blatter’s own criticism of the way the US justice department had attempted to “interfere” with Fifa’s leadership meeting.

His suggestion that corruption allegations in connection with the awarding of World Cups in 2018 and 2022 to Russia and Qatar were a case of sour grapes from the US and England, who were unsuccessful candidates for the tournament, got a sympathetic airing.

It seemed that Blatter was continuing to battle on in the face of the scandal and widespread criticism, so his about-face caught Swiss media off-guard, with many questioning why he waited until now to quit.

The Tribune de Genève noted that in fact Blatter will be hanging around for another seven months when he should be stepping down immediately.

“It is a surprising departure that no-one expected,” the Nordwestschweiz newspaper said on Wednesday.

But if Blatter really had the best interests of football and Fifa in mind “he should have resigned before the re-election”.

“No sports organization is struggling with such a poor image as Fifa,” the St. Galler Tagblatt said.

As president for 18 years he should take “primary responsibility for this”.

The Südostschweiz newspaper said that the allegations against Jérôme Valcke, Fifa’s secretary general and Blatter’s right-hand man, were probably the “straw that broke the camel’s back”.

The daily said “Blatter himself must have felt the hot breath of law enforcement down his neck”.

Tages Anzeiger made reference to another factor raised by The New York York Times, that Fifa’s big sponsors ended up “belatedly” being a power even greater than the organization’s long-standing president.

The Neue Luzerner Zeitung said Blatter’s announcement so soon after being re-elected was difficult to understand “without massive pressure from outside”.

He knew that the corruption scandal would “poison” his fifth term and “could no longer ignore what was going on around him”.

Swiss media reaction to Blatter’s planned resignation was milder than the response of British newspapers, who have long been staunch critics of the Fifa head.

Tabloids in the UK reacted with glee over the development, with the Sun roaring “Fifa fatcat quits” in one headline.

Some British papers called for the 2018 World Cup to be given to England, with the Daily Telegraph declaring that “Russia and Qatar World Cups in doubt as Blatter forced out”.

Swiss daily Blick turned its attention to who is lined up to replace Blatter, including Michel Platini, Uefa president, as one possibility, as well as Jordan’s Prince Ali who lost to Blatter in last week’s Fifa election.