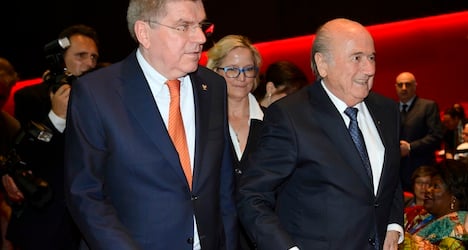 “In April, the Fifapresident informed the IOC that he would not be attending in person the session in Lausanne. His plans have not changed,” a
Fifa spokesman confirmed.

Blatter announced his resignation as FIFA president on Tuesday, four days after his election for a fifth successive term.

That thunderbolt came after a week of turmoil for football's ruling authority, with the arrest of seven FIFA officials on corruption charges and
inquiries into the awarding of the 2018 and 2022 World Cups to Russia and Qatar.

The 79-year-old Swiss became one of football's two representatives on the IOC in 1999, shortly after becoming FIFA boss for the first time.

The other is African football chief Issa Hayatou.

The Cameroonian will attend the meeting in Lausanne, the Confederation of African Football told AFP.

Blatter is to remain in office at Fifa until an election is held, sometime between December this year and March 2016.

Under new age limits he was going to have to relinquish his IOC membership on March 10th next year when he turns 80 irrespective of whether he was still in charge of Fifa.

Among the items on the agenda at Tuesday's IOC gathering are the presentation by Beijing and Almaty of their bids to host the 2022 Winter
Olympics.