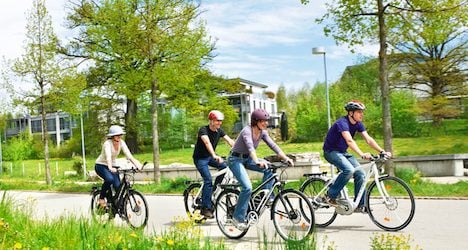 In the past four years the number of users of e-bikes seriously injured or killed in Switzerland more than doubled, the Swiss Council for Accident Prevention (bfu) said on Tuesday.

In 2011, 69 people were seriously injured, while last year the toll rose to 145 and an additional five people lost their lives, the council said.

The increase in accidents matches the growth in the use of electric bikes, which are expected to continue growing in popularity with an attendant further rise in accidents, the bfu said.

Losing control of the bicycle — without involving another party — is more frequently the cause of mishaps than collisions, according to an analysis conducted for the accident prevention council.

Users typically fall while trying to avoid an obstacle or because they under-estimate the time it takes to brake, the bfu said.

The seriousness of accidents with electric bikes is much greater than those involving regular bikes, which typically travel more slowly.

But the bfu said an average, users of e-bikes are older than other cyclists and are therefore more physically vulnerable.

When e-bikes are involved in collisions with other vehicles they usually occur at an intersection or roundabout where motorists do not respect the priority of the cyclist, the bfu said.

The evidence indicates that motorists typically under-estimate the speed of bicycles, it said.

The bfu said more research into the cause of accidents is needed, along with an examination and better application of road construction standards to improve safety for e-bike users.

Improvements to helmets for cyclists and courses for operating electric bikes, are among the measures being pursued by accident prevention officials.

Increased awareness of e-bike users and motorists about the speed of the bicycles are among the other challenges, the bfu said.

The council is launching a poster campaign with its prevention character “Franky Slow Down” at the end of the month and it is distributing safety brochures. New bfu poster reminding people that e-bikes are faster than they may realize.