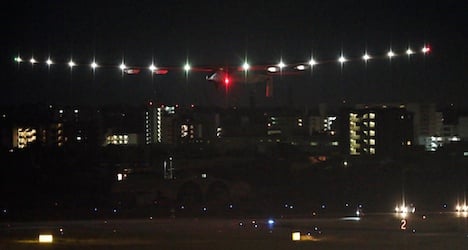 Solar Impulse 2 had travelled 26 percent of the way to the tropical US state by 5am GMT, having flown 2,204 kilometres with 6,136 kilometres more to go, according to the project.

That put the plane and its veteran pilot more than 36 hours into the toughest leg of the bid to circumnavigate the planet using only the power of the sun.

“Getting to this point has been challenging,” he said.

“This flight will only be a success if we really partner, the airplane and myself.”

The experimental solar-powered aircraft left Japan at around 6pm GMT on Sunday — the small hours of Monday local time —after spending a month in the central city of Nagoya.

The propeller-driven plane was originally scheduled to fly directly from Nanjing in China to Hawaii.

But bad weather along the way forced a diversion to Japan that extended for almost the whole of June as forecasters waited for
better conditions.

The temperature in the unpressurised cockpit at one point fell to minus 6C as Borschberg ascended to 8,500 metres above the water.

The journey to Hawaii was expected to take at least five days.

The aircraft has 17,000 solar cells and on-board rechargeable batteries with a top speed of 140 kilometres an hour.