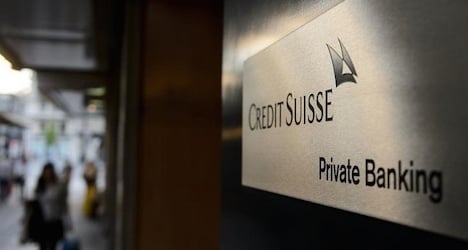 CS reported net income of 1.1 billion Swiss francs in the period to the end of June, compared to a 700 million franc loss in the same period last year.

It was the first earnings report under the leadership of new chief executive Tidjane Thiam, who was born in Ivory Coast and in June became the first African-born executive to take charge of a major Swiss bank.

Most analysts had forecast a net profit of around 690 million francs for the quarter.

The Zurich-based bank said its gains were partly driven by “a very strong performance in the Asia-Pacific region,” highlighting the importance of the region moving forward.

Through the first half of the year, 16 percent of overall revenue and 27 percent of pre-tax income came from Asia Pacific.

“We foresee further significant opportunities in the years ahead,” the bank said in a statement.

“We are… increasingly recognised as the Entrepreneurs' Bank of Asia Pacific, a status we are determined to reinforce in the years to come.”

Revenues in the investment bank were however offset by higher spending in “risk, regulatory and compliance infrastructure”.

As part of the settlement, Credit Suisse admitted guilt on a felony charge.

Thiam, the former head of British insurer Prudential, has since being tipped as the new chief executive floated the notion of making key changes to the investment unit.

Investors and analysts have bet that Thiam is likely to downsize the bank, Switzerland's second largest, with an aim to focus more intensely on private banking and wealth management.

There has similarly been speculation about the prospect of job cuts in the investment arm.

In Thursday's statement, the bank said it planned to comply with a growing trend of tighter leverage requirements “primarily through reductions in investment banking”.

Thiam and board chairman Urs Rohner said that Credit Suisse would continue “focusing resources on businesses where we see the greatest potential”.

The earning report highlighted that bank made gains despite continuing market volatility related to Greece's future in the eurozone.

Domestically, the Swiss central bank's shock decision in January to end efforts to hold down the value of the franc against the euro, continued to have consequences.

Most of Credit Suisse's expenses are in francs, but significant portions of revenue are generated in other currencies, so the soaring local currency has led to rising costs.

Credit Suisse shares shot up 6.9 percent to stand at 28.7 percent in late morning trading, while Swiss SMI index was up 0.96 percent overall.