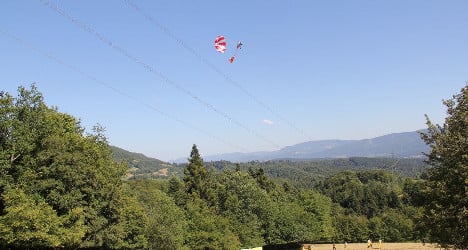 The accident happened around 3.15pm at Séprais, near the village of Boécourt in the Swiss Jura.

Three paragliders were flying over Boécourt when they were surprised by a strong westerly wind, police said in a statement.

While two of them were able to land in a field before Séprais, the third, who was flying at a higher altitude, was blown further away.

He then became tangled in an anti-lightning cable above a set of power lines carrying 380,000 volts, some 90 metres (295 feet) above the ground.

Police, paramedics, air rescue service Rega, members of the Swiss Alpine Club and BKW staff were all mobilized to help save the man in what was considered a risky operation.

Emergency services were concerned that the cable might not hold the weight of a rescue worker in addition to the paraglider, while Rega personnel thought the use of a helicopter might blow the man to the ground.

However given the complicated nature of the situation, a helicopter was finally deemed necessary.

After three and a half hours, a Rega rescue worker was winched 60 metres down from a helicopter to successfully airlift the man off the power line.

The paraglider, who was uninjured, displayed “exemplary bravery and a calm head” during the rescue operation, said police.

On Wednesday, a 27-year-old paraglider in Engelberg was less fortunate.

For unknown reasons, he encountered difficulties after taking off and crashed into a tree 15 metres off the ground, said cantonal police.

Rescue workers were unable to save the man, who died from his injuries at the scene.