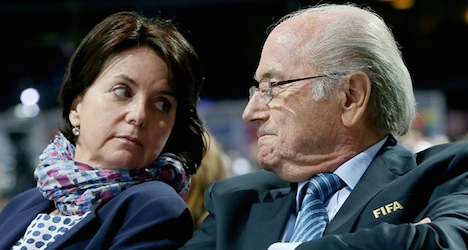 “The media ruined his reputation,” said Corinne Blatter, who was a top advisor to her father as he rose the ranks of world football's governing body.

“Why are they picking on him?” she asked.

Corinne Blatter said it was “not just envy — it's hatred.”

Blatter, a Swiss citizen, became engulfed in the worst-ever scandal at Fifa last month when Swiss prosecutors opened a criminal investigation against him over mismanagement.

“I am shocked that he is accused of criminal acts,” Corinne Blatter told Blick in an interview published online.

“My father is not a criminal,” she said.

On Friday, Fifa's top US-based sponsors, including Coca-Cola, Visa, McDonald's and Budweiser, called for Blatter to immediately step down, saying that his remaining in office was inhibiting urgently needed reform.

Blatter has said he will go, but only once his replacement is chosen at a special election in February.

“Under no circumstances” will Blatter remain as Fifa's president after that February 26th vote, Corinne said, following previous speculation that her father may seek to extend his tenure.

Many believe, however, that Blatter could be forced out in a matter of days, with the Swiss criminal probe and the unified resignation call from powerful Fifa sponsors putting unprecedented pressure on the 79-year-old, who has led Fifa since 1998.

“I was afraid they would take him away in handcuffs,” she said.

She also raised questions about the conduct of the Swiss attorney general's office, noting that officials provided her father with no warning and that the press release announcing the criminal proceedings amounted to condemnation before Blatter could even provide a defence.

Swiftly after Coca-Cola issued its resignation call, Blatter's US-based lawyer Richard Cullen announced that his client had no plans to resign.