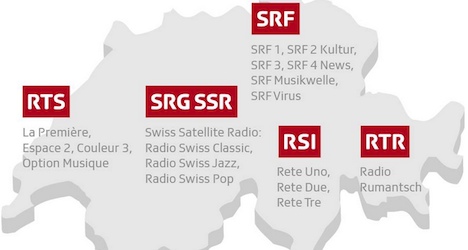 The expected reduction is in part due to a judgment from Switzerland’s highest court, which ruled earlier this year that residents were not required to pay value-added tax on licence fees and that the SBC must pay the VAT.

Additionally, a higher share of licence fee revenues — six percent instead of four percent — will go to private local and regional stations as of next year under changes to the Radio and Television Act.

“We want to try to work more efficiently where possible,” he said, but he acknowledged there would be cuts in programming as a result of the layoffs.

The public broadcaster plans to eliminate 102 full-time-equivalent positions at its German-language operations (SRF and TPC), 74 posts at French-language RTS and 49 FTEs at Italian-language RSI.

A further 20 jobs are targeted in the SBC’s directorate-general offices.

Unions representing employees of the broadcaster reacted with shock at the announcement and urged politicians to boost licence fees to avoid the cuts.

The SBC said it plans to consult with employees over a “fair social plan”.

It said it would also look at early retirement and reductions by not filling vacancies before deciding on the precise number if dismissals.

De Weck said political pressure did not play a role in the decision to cut costs, the ATS news agency reported.

There have been calls from the private sector, however, to reduce the size of the public service.

The SBC has a current overall budget of around 1.6 billion francs, while the planned savings from jobs cuts amount to a 2.5 percent reduction.