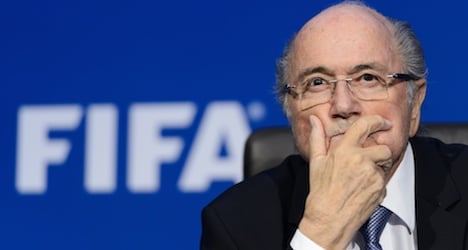 The ethics committee tribunal was also to decide whether to take action against UEFA leader Michael Platini and former Fifa vice president Chung Mong-Joon, both candidates to take over from Blatter.

As the drama intensified, British media reported that the ethics committee had recommended a provisional suspension of 90 days for Blatter.

But a close associate of the besieged Fifa chief dismissed the claims.

“I was with president Blatter 30 minutes ago and no information of this kind was communicated to us,” the associate told AFP, while a spokesman for the committee tribunal refused to comment.

The reports were based on statements by Klaus Stoehlker, described as a close adviser to Blatter.

However, in June, Fifa denied any legitimacy to Stoehlker, claiming that his duties with Blatter had ended on May 31st.

Meanwhile, Chung hit out at Blatter, calling him “a hypocrite and a liar” and threatening a legal case for embezzlement of Fifa funds.

The 79-year-old Blatter, who has ruled Fifa for 17 years, insisted in a German magazine interview that he would not be forced out of office before an election to be held in February.

Fifa has kept the activities of its independent ethics committee cloaked in secrecy in recent months as accusations of corruption have mounted.

But a Senegalese member of the committee's adjudicatory chamber, Fifa's highest court, said it started a five-day meeting on Monday, with Blatter and the other two officials on the agenda.

Abdoulaeye Makhtar Diop, a former Senegal sports minister, said in a statement: “the members will focus on the topics of the Swiss Sepp Blatter, Fifa president, the Frenchman Michel Platini, president of UEFA, and the South Korean Chung Mong-Joon.”