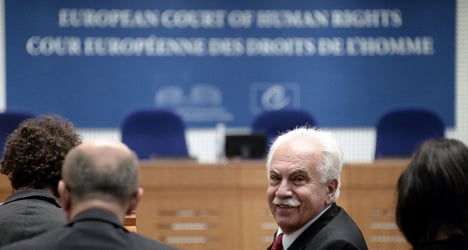 In a landmark free speech ruling, the ECHR judges ruled by ten votes to seven that Dogu Perincek, chairman of Turkey's Patriotic Party, should never have been convicted of racial discrimination by a Swiss court for saying that the “Armenian genocide is a great international lie”.

Perincek was convicted and fined in 2007 after a series of press conferences on the topic, which the ECHR ruled was an infringement on his right to free speech.

In its judgement, the court said Perincek's statements related to an issue of “public interest and did not amount to a call for hatred or intolerance . . . and could not be regarded as affecting the dignity of the members of the Armenian community to the point of requiring a criminal law response”.

The court made a clear distinction with Holocaust denial, whose specific history meant it could always be “seen as a form of incitement to racial hatred” in certain countries.

Its judges have earlier noted that the historical facts of the Holocaust, “such as the existence of gas chambers” were “considered clearly established by an international jurisdiction”.

Turkey has always denied that the killings, which started in 1915, were a pre-meditated attempt by the then-ruling Ottomans to wipe out the Armenians.

Before the events, some two million Armenians were living in the territory of the Ottoman Empire.

More than 20 nations have so far recognized the killings as genocide, a definition supported by numerous historians but vehemently opposed by Turkey.

In a series of press conferences in Switzerland in 2005, Perincek repeatedly blamed “imperialists from the West and from Tsarist Russia” for stoking tensions between Muslims and Armenians in order to undermine the Ottoman Empire, and said the resulting deaths were not a premeditated attempt to wipe out an ethnic group.

The Swiss side argued that denying that a genocide occurred is tantamount to “accusing the Armenians of falsifying history, one of the worst forms of racial discrimination”.

The ECHR said it did not have the authority to rule on whether the Armenian killings were a genocide or not, which was a job for international criminal courts.

It also accepted that “the dignity of the victims and the dignity and identity of modern-day Armenians were protected by Article 8” of the European Convention on Human Rights.

But it ruled that in the specific circumstances of the case, a democratic society should not have gone as far as prosecuting Perincek over his comments.

“The context in which they were made had not been marked by heightened tensions or special historical overtones in Switzerland,” the ruling said.

“The Swiss courts appeared to have censured Mr Perincek simply for voicing an opinion that diverged from the established ones in Switzerland,” it added.

The ECHR's Grand Chamber ruling is final and binding on all Council of Europe members.

Perincek's lawyer Laurent Pech has earlier said that his client “neither contested nor defended the massacres,” but merely denied that the Ottoman authorities of the time had a genocidal intention.