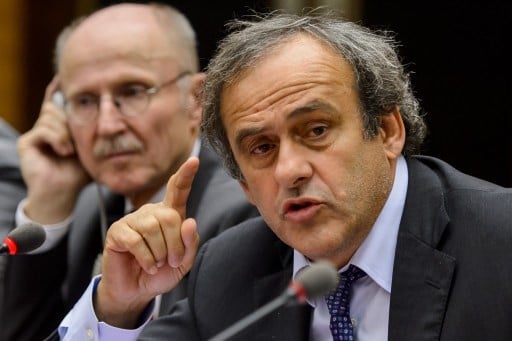 Fifa reconfirmed they will vote for a new president on February 26th 2016 to replace president Sepp Blatter and the executive committee confirmed Platini's bid will not be considered as long as he is suspended.

But Platini's chances have nosedived as neither he nor Blatter can explain an irregular payment of two million Swiss francs ($2 million) made in 2011 for advisory work the Frenchman did for Fifa from 1998 to 2002.

Domenico Scala, chairman of Fifa's electoral and audit committees, told the Financial Times that evidence for the consultancy agreement had not appeared in accounts before the payment, calling it a “serious omission” in an interview Tuesday.

“Both parties were members of Fifa's executive committee and knowingly approved each year financial statements, which were incorrect by two million Swiss francs,” he was quoted as saying.

“That could be seen as falsification of the accounts.”

Scala had appeared to leave the door open for Platini earlier Tuesday by saying that should his ban be lifted or expire before the February 26th election, the Electoral Committee “would decide . . . on how to proceed with the candidacy concerned.”

A source close to the Frenchman told AFP: “We have the feeling that the election committee has not killed Michel Platini.”

Fifa's independent Ethics Committee indicated it would make an announcement on the cases of senior officials being investigated on Wednesday, without revealing any names.

The Swiss-based UEFA president had been considered the favourite to replace Blatter until his suspension.

Alongside Platini, Prince Ali bin al Hussein, who lost to Blatter in May's election, has officially stated his candidacy.

All candidates must submit their application by Monday.

Football's governing body has been in chaos since October 9th when the ethics committee suspended Blatter, secretary general Jerome Valcke, and Platini for 90 days.

The trio were banned from attending Tuesday's Fifa gathering in Zurich when acting president Issa Hayatou attempted to guide Fifa through the latest storm of scandals in Blatter's absence.

“I was pleased to see unity among the Executive Committee members during our discussions of reform and its critical importance to our organisation,” he said in a statement.

With Hayatou in charge, the executive committee welcomed preliminary reform proposals to set an age restriction of 74 years and a 12-year maximum tenure for the Fifa presidency.