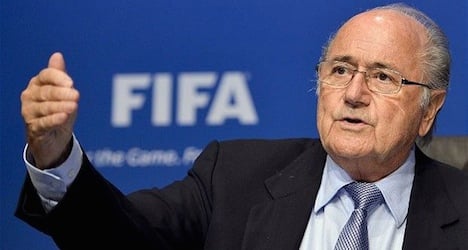 Blatter, who led the Zurich-based world body for football for 17 years until his suspension in October,
appeared in several Swiss media on Wednesday, defending himself against a range of allegations that have sparked widespread calls for reform at Fifa.

Speaking to the Zurich-based Sportinformation news service, Blatter invoked his faith and portrayed himself as the victim of an attack.

“As a good Christian, I have to say that what the ethics commission is doing with me, it's like an inquisition,” the sanctioned Fifa boss said in quotes distributed by the ATS news agency.

Those comments followed an interview aired on the SF DRS television station in which Blatter insisted the burden of proof was on his accusers.

“It's not me who has to prove my innocence,” the Swiss national said.

He claimed he deserved an honourable exit from Fifa, because, he said, “I am not a bad man.”

Blatter is the target of a criminal investigation by Swiss prosecutors over possible mismanagement at Fifa and a $2 million payment made in 2011 to his would-be successor, Uefa boss Michel Platini.

Fifa investigators finalized their probe over the weekend, turning evidence over to the ethics committee's judges, who will issue a verdict next month.

The investigators have called for a lifetime ban against Platini, but the requested punishment against Blatter is not yet known.

In a separate interview aired on the RTS television station, Blatter voiced regret that he did not quit Fifa after the 2014 World Cup in Brazil.

In clips of the RTS interview released on Sunday, the 79-year-old spoke of his recent hospitalization for stress.

“I was close to dying. I was between the angels who were singing and the devil who was lighting the fire, but it was the angels who sang,” Blatter told RTS in the interview that was aired in full on Wednesday.