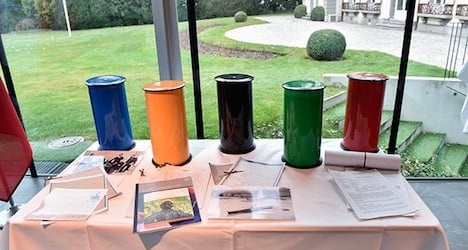 The 200-million-franc Olympic Unity House, a futuristic building designed by Danish architects 3XN, is set to open in 2020 when it will bring together 600 employees now working in different sites for the organization responsible for the Olympic Games.

During a ceremony with local officials, IOC President Thomas Bach disclosed the contents of the time capsules, each coloured differently to match the five Olympic rings.

Bach noted that the IOC had celebrated throughout this year the 100th anniversary of its existence in the capital of the canton of Vaud.

“Today we are looking to the future of the Olympic movement here in Lausanne,” he said in a statement.

“What better symbol of our attachment to the Olympic capital than the construction of a new building?”

The three-storey structure with curving glass and steel walls set in a park next to the chateau of Vidy was selected from 118 entries in a competition launched by the IOC more than two years ago.

The time capsules include key items from the history of the Olympic movement including:

– Photos of the model of the new Olympic House

– Messages from Lausanne-area children describing how they imagined the Olympic Games would look like in 2015.