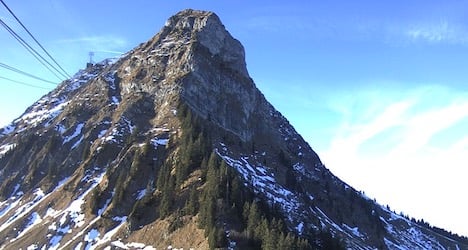 Webcam view on Tuesday of Moléson, where visitors are being encouraged to use the lifts for sightseeing, given the lack of snow for skiing. Photo: Moleson.ch

Ski resorts at lower altitudes have been unable to open because of bare slopes, while it has been too warm for artificial snow-making machines to operate.

“The temperatures are astonishing for the season,” Arthur Clivaz, president of the Valais ski lift association, told the ATS news agency on Friday.

“This makes three weeks it’s been warm in Valais,” he said referring to the mountainous canton bordering the eastern end of Lake Geneva.

Even at night the temperatures have only dropped to two or three degrees.

The mercury was set to rise to 12 degrees in Geneva, Basel and Chur, in the canton of Graubünden, on Tuesday, according to MeteoSwiss, the national weather office.

Warm conditions are set to prevail through to Boxing Day at least, with little prospect of snow, the office’s forecast showed.

That has left even major resorts struggling.

Some resorts, such as Moléson-sur-Gruyères in the canton of Fribourg, opened their lifts at the weekend to allow visitors to take in panoramic views, even if skiing was unavailable.

In the Bernese Jura, all the ski resorts remained closed.

The small ski stations in the area are proposing hiking among the alternative activities to pursue over the Christmas holidays.

Dedicated skiers need to head to higher-altitude ski areas such as Verbier, Zermatt or Glacier 3000 at Le Diablerets in the Vaud Alps that can count on glaciers for snow cover.

Website On the Snow on Tuesday listed 78 Swiss ski resorts that remain closed with hard-packed slopes at those that remain open.

Engelberg-Titlis in Central Switzerland had some of the best conditions with 155 centimetres of snow at the higher levels (above 3,000 metres) and all 22 lifts operating, although more than 30 percent of the runs were closed, according to the site.

The shortage of snow and the high franc are posing major challenges for the Swiss tourism sector.

His call, relayed by the Sunday newspaper Schweiz am Sonntag, has won support from industry leaders and politicians.

The industry is ready for dialogue but needs more support, Bär said.

“Alone we cannot solve the challenges.”