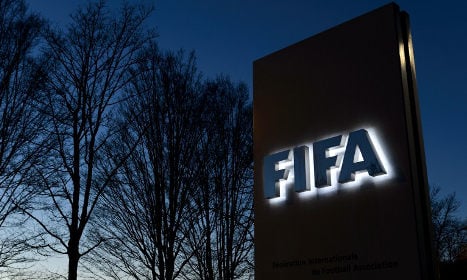 The material “relates to bank accounts allegedly used for bribes connected with the grant of marketing rights to soccer tournaments in Latin America and the USA”, a statement from the Swiss attorney general's office (FOJ) said.

The US justice department asked for documents related to about 50 accounts at 10 different banks, with the FOJ reviewing various requests to assess their relevance to the US prosecutions.

In some cases, the US requests have been deemed valid and the documents were handed over on Wednesday but decisions on other materials were still pending, the FOJ said.

Separately, the FOJ said Switzerland had carried out an American request by freezing about $80 million (€73 million) in 13 bank accounts, which could be handed over to the US government following a court order.

A total of 39 people within world football and two companies have been charged by Washington in a sweeping investigation into bribery and corruption at Fifa going back decades.

Switzerland has opened a separate investigation looking specifically at alleged corruption during the bidding for the 2018 and 2022 World Cups, in Russia and Qatar respectively.

Swiss prosecutors are also targeting Sepp Blatter, who was banned from football for eight years on December 21 by a Fifa ethics court after a 17-year term as the president of world football's governing body.

But it was the US indictments, the first of which were unsealed in May, which sparked the unprecedented scandal within world football, prompting calls for major reforms at Fifa, including by the top corporate sponsors of the World Cup.