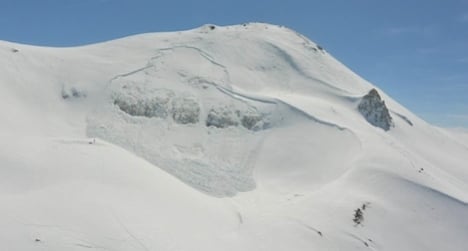 The aftermath of an avalanche that struck the region last year. Photo: Valais cantonal police

Police in the southern Swiss canton of Valais said the 300-metre wide avalanche had swept away the three skiers in the Maederluecke mountain pass at an altitude of 2,500 metres (8,200 feet) at around 11:30am.

Rescue services, including three dog teams and two helicopters, had rushed to the scene, but by the time they got there, another group of skiers had managed to locate and dig out the victims.

“Two people died from their injuries. They were two Italian nationals, aged 20 and 24,” police said in a statement, adding that it had opened an investigation into the accident. The nationality of the third skier who survived was not known.

Police in Valais — home to many popular ski resorts including Zermatt and Crans-Montana — had warned Friday that there was a high risk of avalanches across the canton this weekend following several days of heavy snowfall.

Across most of the region, the danger level stood at three on a scale of five for cross country and off-piste skiers, they cautioned.

In some parts of the canton, although not the area where Saturday's avalanche happened, the danger level was estimated to be four out of five, indicating that a single skier can easily set of avalanches at a distance.

During the 2014-15 ski season, 12 people were killed by avalanches in Valais.