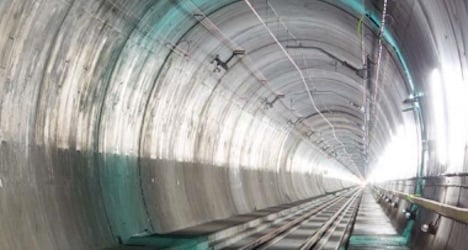 The 57-kilometre railway tunnel, the longest in the world, is set to open on June 1st, 17 years after drilling under the Alps began on the first shaft.

And after spending 12.2 billion francs ($12.14 billion) on the tunnel linking the cantons of Uri and Ticino, the government is planning to inaugurate it with fanfare.


A total of 1,200 international guests have been invited to the tunnel’s opening, with ceremonies planned at the northern end of the tunnel in Erstfeld (Uri) and Bodio (Ticino).

The event is to be orchestrated by German theatre producer Volker Hesse.

All 246 members of the Swiss federal parliament, the seven ministers of the government and the heads of state of neighbouring countries, along with their transport ministers are among those invited.

Three hundred members of the news media are expected.

The opening of such a tunnel deserves a ceremony with great pomp, Gregor Saladin, head of the project for the federal transport office (FTO), told a press conference at Altdorf, the capital of Uri, on Wednesday.

The tunnel, with two tubes, is at the heart of one of Europe’s most important freight transport axes linking Italy to the south with Switzerland and Germany and other parts of Europe, including the ports of Rotterdam in the Netherlands and Zeebrugge in Belgium.

Every year around 26 million tonnes of freight is transported through the Swiss Alps by rail, 80 percent of it transiting to and from other European countries, the FTO says.

The office says a core element of Swiss transport transport policy is to offer an alternative to road transport through the Alps for freight and passengers.

The Gotthard Base Tunnel will shorten the travelling distance between Altdorf in Uri and Bellinzona in Ticino by 30 kilometres.

Because it has virtually no gradients — unlike the current rail link — passenger trains will be able to travel faster — at speeds of up to 200 km/h.

Citizens in 1998 voted in favour of a fund to finance the tunnel along with other elements of the New Rail Link through the Alps (NRLA) project and other public transport projects.

The fund is financed from a heavy goods vehicle charge, a mineral oil tax and value added tax.

During peak periods, around 2,400 people worked around the clock in three shifts to bore the two main tunnels, removing a total of 28.2 million tonnes of excavated material.

Another rail tunnel to the south, the 39.8-kilometre Ceneris Base Tunnel, is scheduled to open in 2020.

By the time that is completed, the Swiss will have spent around 23 billion francs on upgrading the rail link through the Alps.

For more details about the Gotthard Base Tunnel, check here.