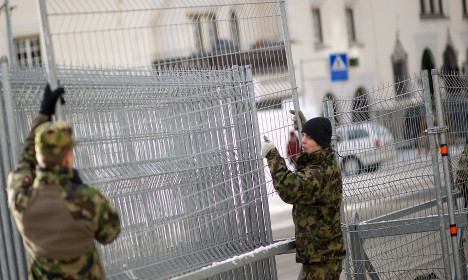 More than 4,000 soldiers were sent to the exclusive ski resort. Photo: Johannes Eisele/AFP

More than 4,000 soldiers were sent to the exclusive ski resort, where heads of state and government mixed with business moguls in a forum that wrapped up on Saturday.

“The involvement of the army in the context of security measures surrounding the WEF 2016 went off without a hitch,” a statement said.


Twelve soldiers assigned to guard the high-profile gathering of the world's rich and powerful tested positive for cannabis and five had used cocaine, according to Swiss media reports, which quoted an army spokesman.

Military police using sniffer dogs discovered that one of the soldiers had more than three grammes of cocaine in his possession.

That soldier was sent home and will face criminal charges, Swiss media have said, quoting an army spokesman.

The other troops who tested positive for cocaine were also sent home and will face sanctions, while those who had only smoked cannabis were allowed to remain in Davos.