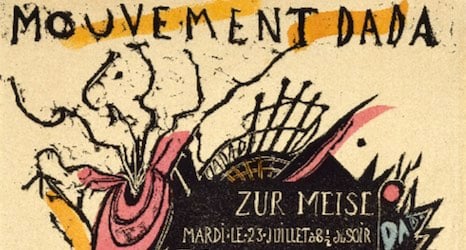 Niederdörfli in Zurich’s old town is thick with ice. It is the coldest day of the winter so far, so cold that my toes are numb inside my boots.

I wonder if it was this cold when, 100 years ago almost to the day, a group of exiled artists gathered in this part of town to found an art movement that would become legendary: Dada.

Like much else concerning the movement, which used absurd art to protest against the war – think cardboard priest outfits and nonsensical chanted poems – it is difficult to know for sure.

To try and grasp a better understanding of it, I meet Zurich guide Annamaria Pal Müller for a Dada city tour.

Our journey starts at Zurich main station. It was here, in 1915, that many of Dada’s main protagonists arrived in Switzerland.

They were immigrants from Germany, Romania and Austria; intellectuals, scientists, poets and artists seeking peace in a world at war.

“They were troubled by what was going on, and wanted to rebel against the political system in a way that would shock and interest people,” explains Annamaria. “They wanted to create both art and a new language.”

The result is a digested form of movements that existed at the time – including expressionism, futurism and cubism – in the shape of performance, media, sound poetry, essays and paintings representing humour and irony.

Inside the Cabaret Voltaire. Photo: Zurich Tourism
Precarious living conditions
Among the main protagonists were German artist Emmy Hennings and her companion, Hugo Ball, who came to Switzerland as refugees in 1916. The latter was responsible for the aforementioned cardboard priest outfit.

Like many of their like-minded contemporaries – who included artists such as Tristan Tzara, Marcel Janco, Hans Arp and Richard Huelsenbeck – Ball and his future wife Hennings were destitute: they moved from flat to flat in Niederdorf, sometimes working six hours a night at cabaret clubs, singing and playing the piano, to earn a living.

“It was a precarious living,” explains Kunsthaus Zurich curator and art historian Cathérine Hug. “Dadaists created art for themselves or for their friends. It was not commissioned, so they didn’t automatically earn from it.”

Annamaria points out the façade of bookshop Orell Füssli on slick Bahnhofstrasse. It used to be a café where Emmy Hennings worked as a singer to make a pitiful living, she explains.

No nonsense
We continue to Hotel Limmatblick, which peers over the Limmat river to the old town.

Opened in 2002, it doesn’t have any historical connection to Dada, but is a good place to discover Dada art: each room is named after a prominent artist, while its “Dadabar” is crammed with works, including a stiletto shoe with spikes poking up through the sole and a chaotic installation comprising artefacts such as a trumpet, a mask and a shower head.

I later read that the Dadaists would publish false reports about themselves in local newspapers, or run into local taverns, shout “Dada!” and disappear again – and I wonder whether there is any way of understanding this so-called “nonsense”.

For the term, there are a multitude of explanations. Some say it was discovered by chance in a dictionary; others, that it derives from the Russian word “da” for “yes”; and others still, that it was inspired by a popular soap.

According to Hug, you have to take the time to think about it to understand it.

She says: “Some aspects of Dada are easy to understand – the absurdity and provocation to counteract what was going on in Europe at the time. But you need to open your mind, and take the time to read a few sentences about it, because we are not all so familiar with what was going on in 1916 any more.

“We don’t necessarily have to deal with censorship, or difficulty travelling across Europe, but that was a huge problem for an international art movement like Dada.”

Photo: Zurich Tourism
Dada opens and closes
The next stop on my tour is Cabaret Voltaire on Spiegelgasse in the old town. Ball and Hennings opened this artists’ tavern, the so-called “Künstlerkneipe”, on February 5th 1916, and with it, officially founded Dada.

Cabaret Voltaire became a popular meeting place for like-minded artists and intellectuals. Lenin was renting a flat a few doors down as he plotted the Russian Revolution, but it is not known whether he frequented the Cabaret’s lively evenings – as described by Hugo Ball in his memoir ‘Flight out of time’.

He wrote: “Tzara is wiggling his behind like the belly of an oriental dancer. Janco is playing an invisible violin and bowing and scraping.” I peer in through the window and try to picture the scene.

Cabaret Voltaire was only open for five months, closing in June 1916 after Ball turned his back on the movement.

However, Dada continued to hold events across Zurich: Annamaria points out locations including guildhouse Zunfthaus zur Waag, where Dada held its first soiree in 1916; coffee houses such as Café Terrasse, where the artists went to catch up on the news; as well as Saal zur Kaufleuten.

It was here that Dada said its goodbyes to Zurich with a final soiree on April 9th 1919. Increased internal squabbling about the movement’s direction had brought it to an abrupt end in Zurich. It lived on in New York, Berlin and Paris.

Dada exhibition at Zurich Kunsthaus. Photo: Zurich Tourism
Relevance in modern times
As for Cabaret Voltaire, it didn’t reopen again until 2004, after a group of artists squatted in it calling for its revival. “Dada was forgotten in Zurich for decades,” says Annamaria.

Nevertheless, argues Hug, it is still relevant today, thanks to its transnational nature.

She says: “Dada was made up of migrant artists, who criticized the absurdity of nationalistic wars. The collective nature and solidarity of Dadaism has so much to tell us today, as nationalism gains ground again.

“We may not have war around us in Switzerland, but we have a lot of nationalism. Dada helps us remember what happened in Europe at the beginning of the 20th century – something it is important we don’t forget.”

My tour with Annamaria comes to an end at the Kunsthaus Zurich, which has one of the world’s largest Dada collections. Hug shows me one of her favourite pieces: Johannes Baargeld, Venus beim Spiel der Könige (Venus at the Kings’ Game).

Dating from 1920, the collage will feature in the Kunsthaus’ anniversary exhibition Dadaglobe Reconstructed, which opens on February 5th as part of a series of events in Zurich to mark the 100th anniversary. Dada jubilee calendar: www.dada100zuerich2016.ch/kalender

I admire the piece visually – it is a fascinating blend of halftone prints, engraving, ink, pencil and gouache – but it doesn’t make the most amount of sense to me.

For now, a more accessible fragment of Dada will have to do: the portrait on the front of the current 50-franc notes is of Sophie Taeuber-Arp, a Swiss Dadaist who joined the movement in 1915. But look sharp, as the National Bank will be printing new notes in April.