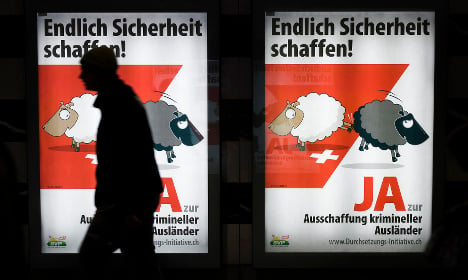 SVP's campaign (poster above) initially garnered strong support, but appears to have lost some steam among voters. Photo: Fabrice Coffrini/AFP

Polling comes at a time when many European countries are hardening their attitudes to migrants after more than a million arrived on the continent last year.

More than half of Swiss voters backed strengthening rules to automatically expel foreign nationals convicted of violent or sexual crimes in a referendum on the same topic six years ago.

But the populist right-wing Swiss People's Party (SVP) has accused parliament of dragging its feet on writing the text into law and watering it down when it did so last March.

Known for its virulent campaigns against immigration, the European Union and Islam, the party has proposed tougher rules, calling for “real deportation of criminal foreigners”.

The initiative faces stiff opposition, including from the government, parliament and all the other major political parties, who have warned it circumvents the “fundamental rules” of democracy.

If passed, it would dramatically increase the number of offences that can get foreign nationals automatically kicked out of Switzerland, including misdemeanours usually punishable with short prison sentences or fines.

It would also remove a judge's right to refrain from deportation in cases where it would cause the foreign national “serious personal hardship”.

More than 50,000 people including hundreds of celebrities have signed a petition against the proposals.

SVP's campaign initially garnered strong support, but appears to have lost some steam among voters.

A poll by gfs.bern earlier this month found 49 percent of those questioned opposed the text while 46 percent were in favour — but with five percent still undecided, the vote could go either way.

Opponents warn that if the text passes, people born to foreign parents in Switzerland risk being deported to countries they have never lived in, just for petty offences.

In the 2010 plebiscite, the Swiss agreed to automatically deport foreigners found guilty of murder, rape and other serious sexual offences, violent crimes like robbery, drug trafficking and abusing social aid.

The proposal was approved by 52.9 percent of those voting.

Parliament last year approved changes to the penal code, but also determined that judges should have the right to avoid automatic deportation in certain cases.

The initiative under scrutiny on Sunday would widen the list of offences that trigger automatic deportation.

Any foreigner found guilty of two lower-level infractions — including fighting, money laundering, giving false testimony and indecent exposure — in the space of 10 years would be expelled.

According to the Federal Statistics Office, the 2015 changes to the penal code would have led to the deportation of nearly 3,900 people in 2014, compared to around 500 on average.

On the basis of the measures proposed by the SVP, that figure would have been 10,200.

Parliament has to pass a law that is approved by referendum, although approval has to come in a double form — both as an overall majority of the nationwide vote, and in a majority of Switzerland's cantons, or regions.

The Swiss will also voice their opinions on a range of other issues in the vote, including the proposed construction of a new road tunnel under the Gottard pass in the central Swiss Alps.