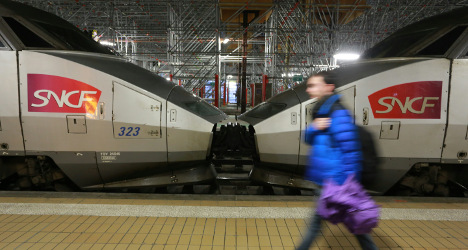 The French industrial action is due to start on Monday evening and last until Wednesday morning.

Only half of TGV services will be running during the strike, announced France’s rail operator SNCF.

Lyria services to Switzerland are among those affected, with SBB telling passengers to expect disruption.

TGV-Lyria trains link Paris and Dijon to the Swiss cities of Lausanne, Geneva, Zurich and Bern.

Supported by all four French trade unions, the strike is aimed at pressuring SNCF in an ongoing battle over pay and working conditions.

The unions have threatened to carry out further industrial action if their demands are not met.

A red SBB train travels through the snow near Zermatt. Here's how to get cheap tickets. Photo by Kevin Schmid on Unsplash

Swiss trains are world famous for their punctuality, cleanliness and for connecting this small yet diverse and topographically challenging country.

The train network – along with the public transport network in most Swiss cities – is so good that many Swiss residents don’t have a car, even outside urban areas.

Known in English as the Swiss Federal Railways network, the operator is known as SBB (German and English), CFF (French) or FFS (Italian), depending on the language being used.

The following is a list of tips and tricks to save a little (or a lot) on transport throughout Switzerland. Here’s what you need to know.

Save by pretending to travel internationally

International travel will usually make things more expensive, but that’s not always the case with rail travel in Switzerland.

Starting or ending your trip in another country can save you plenty – even if you don’t actually plan to go to that country.

You’ll just need to book with the rail provider in the neighbouring country, for instance Deutsche Bahn or France’s SNCF.

For instance, for trips starting or ending in Basel, try changing that to Lörrach or even Freiburg, and the fare might be cheaper than the comparative one when booking with the SBB.

You don’t even need to be that close to the border. If you want to travel from Zurich to Bern, you can save by booking from Signen (in Germany) to Bern, which goes via Zurich, with the Deutsche Bahn.

It doesn’t matter that you won’t be on the leg from Singen to Zurich – there are no penalties for missing a leg of your journey – but in some cases doing so will actually be cheaper.

Even as far afield as the Czech Republic will save you some cash – without needing to go there of course.

Exchange rates when booking abroad can also lead to savings.

According to a report in Swiss news outlet Blick, “people who book their train journeys in Switzerland on the Deutsche Bahn or on the SNCF [French] website, can save up to 10 percent”.

For instance, a full-fare, one-way Lausanne to Geneva ticket purchased from the SNCF website costs 2.55 francs less than when bought from the Swiss Federal Railways (SBB) site, Blick said.

The reason for this price disparity is the exchange rate between franc and the euro, which are at near parity.

However, the report points out that it is preferable not to pay for train tickets on foreign websites with a credit card, “otherwise, the savings may be canceled out by the surcharge on foreign currency, charged by the credit card companies”.

Online payment systems like PayPal are preferable in these situations, Blick said.

Keep in mind that booking abroad won’t always be cheaper, but on some occasions and across some journeys they will be, meaning this tip can be valuable both for spontaneous travel and for regular work travel.

Also if you are from Germany or have the Bahncard from Deutsche Bahn, you may be eligible for discounts on specific Swiss fares, such as trips to the airport (even though you don’t leave Switzerland).

It will only be in a handful of cases, but be sure to check when booking your ticket if foreign travel passes work on that particular route or trip. A red SBB train in the Swiss city of Aarau, Switzerland. Photo by Kajetan Sumila on Unsplash

Sleep in (no, really)

It might get the worm, but the early bird also gets stung by higher fares for traveling at peak hour.

If you can, travelling after 9am will often be cheaper with the SBB’s 9-Uhr-Karte (9 O’Clock Card).

In fact, avoiding peak times – i.e. 7am to 9am and 5pm to 7pm – can be significantly cheaper, rewarding flexible travellers.

While this might be difficult or impossible in some jobs, the Covid pandemic has forced employers to at least consider flexible work schedules, so it’s worth asking your boss if you can change up your starting time.

If you’re on holiday or making a non-work related trip, travelling outside peak times is also likely to be more pleasant (and you might also save by not having to pay to reserve a seat).

Another way to save on fares – but which might require a little research – is by buying a daily GA pass in a particular municipality or canton.

The GA is like an all inclusive pass which gives you unlimited travel. This is available at a national level (see below), but also in particular municipalities (or in some cantons).

Often a daily pass in a particular municipality will be lower than a one-way ticket where the origin and destination are in the same municipality or canton.

German-language travel blog Fewoland notes that second-class one-way tickets can often cost CHF75, particularly at short notice, but a daily pass in a municipality will cost between 35 and 42 francs.

Day passes often cost 52 francs, which can be cheaper than a fare.

Even if you don’t plan to travel more than once, you’ve already saved money by booking the daily pass.

You can find some discounted municipal day passes at this link.

One cantonal example is the Ticino Ticket, which gives you unlimited travel in the southern canton of Ticino.

Perhaps the best and easiest way to save is by booking a Supersaver ticket directly from the SBB.

Expanded in 2018 to boost stagnating passenger numbers, Supersaver fares are up to 70 percent cheaper than regular fares.

These fares are only available online – whether via your browser or the SBB app – and not at the SBB machines on the platforms and at stations.

As a side tip, the Deutsche Bahn machines will sell their version of Supersavers at the machine itself, which might be helpful if you can’t get online and your journey starts off in Germany (in which case the ticket will likely be cheaper, as we covered above).

Booking a Supersaver fare requires a bit of foresight, as they are not available for spontaneous trips.

They can however be booked for travel a few days in advance (they go on sale 60 days before the date of travel).

The earlier you book a Supersaver fare the better, although be aware that it must be used for that particular train on that particular day, i.e. you cannot take a later or earlier train unlike with normal Swiss rail tickets.

It might sound a little wacky, but in some cases first class travel is actually cheaper than travelling in second class.

The first is through a loophole – which was discovered in January 2022 and may be closing soon – and the second is more legitimate.

When visiting the booking platform, you will often assume you are seeing the cheapest fares, however if there is a first class Supersaver fare, you won’t see it unless you select the option to travel in first class.

“The primary goal is to make better use of trains that are under-utilised,” said Thomas Ammann, spokesman for the public transport industry organisation Alliance Swisspass.

The following link has detailed advice for how you can make the most of this upgrade deal.

Train travel: How you can save on first class upgrades in Switzerland

If you travel a lot, travel spontaneously and travel far, then the GA Travelcard is the pass for you.

The GA Travelcard gives you unlimited travel all across Switzerland for a year. The card isn’t just limited to rail transport, you can also travel on boats, buses and trams all across the country

Some railways, such as tourist-focused mountain railway lines, will not accept the GA Travelcard, but this is a rarity.

The GA Travelcard costs CHF3860 per year for second class (340 per month), or CHF6300 (545 per month) for first-class travel. Passes for children and concession rates are cheaper.

In order to get the GA, you’ll need to get a SwissPass (not to be confused with the Swiss Travel Pass, which is mentioned below). Many of the discounts which are available on long-distance travel are also available in major urban public transport networks. A red SBB train travels through the snow near Zermatt. Here’s how to get cheap tickets. Photo by Kevin Schmid on Unsplash

The SwissPass is a red chip card with a picture of you which is available to Swiss residents. Once you have that, you can get your GA pass.

Fortunately, the GA Travelcard is also available on a monthly basis. It costs CHF420 for one-month pass.

This is good for tourists of course, but it might also be worthwhile if you have a few trips planned over a certain period, such as Christmas or over summer.

Considering that one-way tickets can be around the 75CHF mark, paying CHF420 for a month of unlimited travel can pay off pretty well.

Stash your GA Travelcard and save

Even frequent travellers in Switzerland sometimes don’t know that you can give your GA Travelcard back to SBB when you are not in the country, provided you are leaving for more than a week.

This will cost you a fee of CHF10, but you can get up to CHF315 back per year for a second-class GA Travelcard (and more for a first-class).

Fortunately, the SBB have counters at the airport where you can deposit your pass – meaning you can use it all the way up until you leave.

When you arrive, you don’t need to pick up the same ticket again – just get your SwissPass reactivated by the SBB and your GA Travelcard will be valid again.

You can do this for up to 30 days per year – and the 30 days do not need to be consecutive, which is great news if you travel abroad regularly or even semi-frequently.

There are also a few tricks and loopholes you should be aware of when travelling with bikes, luggage and dogs (not necessarily at the same time).

Dogs which have a ‘shoulder height’ of less than 30 centimetres (i.e. the ears and tail aren’t counted) are considered small enough to travel free.

The rules for larger dogs vary, with dogs bigger than 30 centimetres treated as either children or luggage.

While the SBB loves to tell you how bike friendly it is, taking one with you can be incredibly expensive.

To get around it, you can detach the front wheel and bind it to the rest of the bike (perhaps with your bike lock).

The bike can then be stowed under your seat, above your seat or in the luggage compartment free of charge.