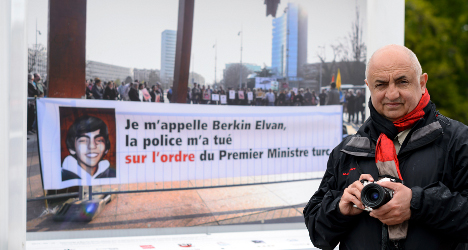 Berkin Elvan spent 269 days in a coma after being hit in the head by a police tear gas canister during the anti-government protests that rocked Istanbul in May and June 2013.

His injury and subsequent death helped galvanise opposition to Erdogan's government and the heavy-handed tactics used by the police.

His picture is featured in a photography exhibition across the street from the United Nations complex in Geneva, which is supported by the city and press freedom group Reporters Without Borders.

A caption underneath the picture reads: “My name is Berkin Elvan. The police killed me, on the order of Turkey's prime minister.”

Erdogan was prime minister when Elvan was injured on his way to buy bread during the so-called Gezi Park protests.

A spokesman for the canton of Geneva, Philippe d'Espine, told AFP that Turkish representatives had asked for the picture to be taken down.

The spokesman said a decision on the request would be taken during a weekly meeting of the municipal government on Tuesday.

The exhibition showcases the work of photographer Demir Sonmez, a Swiss citizen of Kurdish and Armenian origin, who told AFP his objective was to highlight “the multiple struggles of the people.”