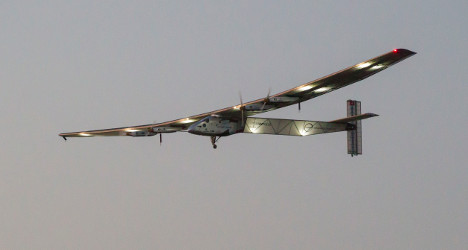 The single-seat plane with the wingspan of a Boeing 747 is covered in solar cells that power its propellers and charge its batteries. The panels provide the plane's sole source of energy for the flight.

The flight to the Lehigh Valley International Airport is expected to take 17 hours, organizers said.

The gangly plane, which travels at an average speeds of only 30 miles (48 kilometers) per hour, flew out of the Dayton International Airport on time at 4 am (0800 GMT).

“I'm a bit sad to leave Dayton, the city of the Wright Brothers, but also excited to continue our adventure,” Piccard wrote in a brief message posted on the organizer's blog.

Piccard said he dedicated this flight to the engineers “who worked all night to make sure #Si2 could fly to Lehigh Valley today. A fantastic team!”

Goodbye #Dayton and the #WrightBrothers ! We have really enjoyed our stay, see you soon pic.twitter.com/lFTgQia8Rn

The Solar Impulse 2 flight had been originally scheduled for early Tuesday, but problems arose with the fan needed to keep the plane's giant mobile hanger inflated. While rebooting the system the deflating hangar fabric touched parts of the airplane, which has 17,000 solar panels.

“After the fans that keep the mobile hangar inflated experienced a brief power failure, the plane underwent checks to verify that no damages resulted from the event,” the organizer said in a statement.

Flight engineers gave a go-ahead on Tuesday after closely inspecting the plane for damage.

The Solar Impulse 2 has traversed much of the globe in stages since taking off March 9th, 2015 from Abu Dhabi.

The flight to Pennsylvania is the 13th leg of Solar Impulse's projected 16-leg east-west circumnavigation, with Piccard and Swiss businessman Andre Borschberg alternating as pilots.

Piccard, a Swiss psychiatrist and balloonist, initiated the project.