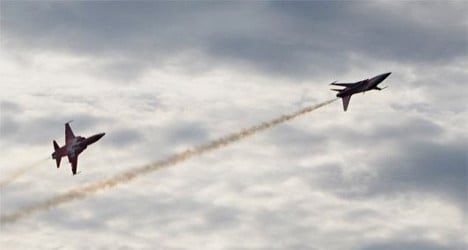 The crash is the first such incident involving Patrouille Suisse — the Swiss air force's acrobatic team — in its entire 52 year history, said the Swiss defence ministry.

“For reasons still unknown, two Tiger F-5E plans from the Patrouille Suisse collided this afternoon during a training flight for an air show in Leeuwarden,” said the ministry in a statement.

The pilot ejected to safety, Dutch and Swiss officials said.

But his jet crashed into a large pond in the northern Friesland village of Beetgum, bursting into flames, near the Leeuwarden air base which is hosting a major air show this weekend.

The pilot fell through nearby agricultural greenhouses and was taken to hospital to be treated for his injuries, including a fractured foot, the Dutch broadcaster NOS reported.

Television images showed a plume of smoke rising from the burning wreckage, which looked to have narrowly avoided slamming into a nearby house.

The second plane involved was able to land safely.

The Patrouille Suisse's participation in the airshow this weekend has been cancelled, the Swiss defence ministry said.

A decision will be taken next week regarding the squad's scheduled appearances for the rest of the year.

In a press conference on Thursday, the head of the Swiss air force, Aldo Schellenberg, said there was no sign of mechanical failure in the plane, which was 40 years old, reported news agencies.

However the incident has raised questions among politicians over Swiss participation in air shows.

#patrouillesuisse F-5E J-3086 five minutes before it crashed on the #leeuwarden runway pic.twitter.com/h2OO6Gwtrf