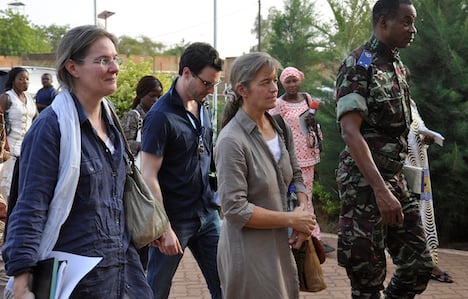 Stockly during her first period of captivity in 2012. Photo: AFP

The video – which runs for two minutes and 50 seconds and was posted on social media sites Twitter and Telegram as well as YouTube – shows a veiled woman who appears to be Western.

Speaking in French, in a barely audible voice, she says she is Stockly.

Both facing the camera, and in profile, she gives the date as May 17, 2016, and says she has been in the hands of Al-Qaeda in the Islamic Maghreb (AQIM) for 130 days.

She thanks her family and the Swiss government for their efforts to secure her release.

Stockly says she is in good health but that the heat is difficult to bear.

The group said it would free her in exchange for freeing a number of AQIM fighters jailed in Mali and one of their leaders held in The Hague.

Switzerland has demanded her release without conditions.

Stockly, who is in her 40s, is a Christian missionary who was previously abducted by Islamists in northern Mali's Timbuktu in 2012.

On that occasion, she was freed about two weeks later, and opted to keep living in Mali.

The Swiss foreign ministry, responding to a question from the Swiss news agency SDA, said it was aware of the video.

Foreign Minister Didier Burkhalter said in January his department was struggling to win Stockly’s release, but the case was very difficult.