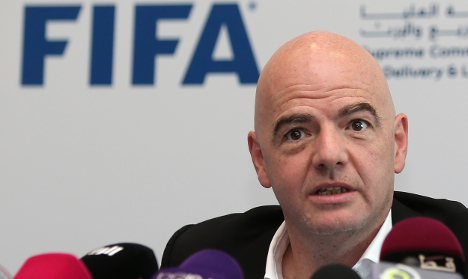 The 11-page memo, dated May 23 last, concerns the first two months of Infantino’s presidency and its unnamed author sent the document to Sindisiwe Mabaso-Koyana, acting chairperson of Fifa’s audit and compliance committee.

“It is my duty to report potential cases of breaches of regulations,” the author wrote, claiming Infantino had not respected the four-month delay before the Mexico Congress in May to appoint people close to him to the various Fifa committees.

“This undermines all efforts taken up to date, to strengthen Fifa’s governance,” the memo stated.

It also questioned Infantino’s lifestyle, as well as possible conflicts of interest, such as the use of private jets, which it says were paid for by Russia and Qatar and estimated at between $115,000 and $150,000 (€134,000).

The memo further notes that Fifa has made two company cars and a driver available to Infantino. The second car which is used primarily by Infantino’s family cost $20,140 in March and $13,800 in April.

Infantino took the helm of the scandal-plagued body in February vowing to lead world football into a new era of “transparency” and “honesty”.

A Fifa spokesman told AFP that there was “nothing new” in the memo. “A restructuring process is ongoing,” she said, adding it is “normal that some people are not happy”.

Regarding costs, the spokesman said the expenses “comply with Fifa rules”.