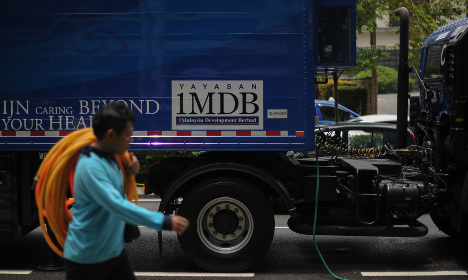 The works were seized following a request from the United States, one of several countries probing alleged massive fraud at the Malaysian state fund 1MDB. Photo: AFP

“The operation is over and we confiscated the three paintings,” Reyser told AFP in an email.

She declined to comment on where the paintings had been kept or the individuals involved.

Earlier this week, the US justice department filed lawsuits seeking to reclaim more than $1 billion in assets linked to stolen or laundered 1MDB funds.

Artworks by Monet and Van Gogh were among the assets listed in the lawsuit filed at a California federal court.

Authorities in the US, Switzerland and Singapore are probing claims that the prime minister, his relatives and associates syphoned off enormous sums of public money.

The assets targeted for US seizure include royalties from the 2013 financial crime caper “The Wolf of Wall Street” starring Leonardo DiCaprio.

The film, directed by Martin Scorsese, was produced by a company owned by Najib's stepson Riza Aziz, using more than $100 million diverted from 1MDB, according to the US justice department.

Both Najib and 1MDB have consistently dismissed allegations of wrongdoing as political attacks by his opponents.