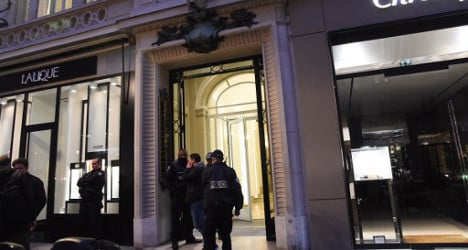 “Two men pretended to be couriers to get the door opened,” a police source told AFP on Thursday.

After threatening staff there with tear gas canisters, they escaped “with about 10 watches with an estimated value of 500,000 euros ($546,000)”, said the source.

A spokesman for Girard-Perregaux's parent company Kering confirmed the value of the stolen watches.

In March, a Chopard jewellery store in the nearby Place Vendome was robbed of an undisclosed amount of merchandise by two men armed with a pistol and a grenade.

Security was stepped up in the chic square after a series of violent robberies there in 2014.

Both raids were in the same area that reality TV star Kim Kardashian was robbed in a luxury apartment by armed men who got away with jewellery worth around nine million euros ($10 million).