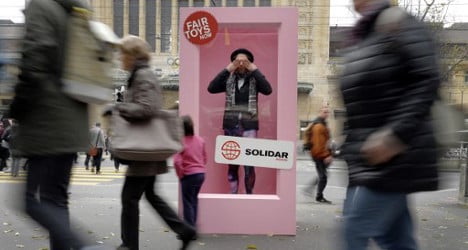 Passers by were invited to pose for photographs next to the model dressed in a dark jacket worn over a white shirt with a stiff collar.

Charity Solidar Switzerland set up the stunt to raise awareness about the conditions in factories in China.

Solidar has also launched an online petition called “Fair Toys Now” in which American toy manufacturer Mattel, the maker of Barbie, is singled out and urged to “take responsibility for the working conditions in the supply chain”.

Solidar calls for an end to “80-hour work weeks” and the provision of “wages that are sufficient for a decent living”.

“This petition, which has already garnered 3,000 signatures, will be delivered on December 15th to Mattel's European headquarters in Amsterdam,” Solidar spokesman Lionel Frei said.

Last week, Solidar had pulled the same stunt with a flesh-and-blood Barbie in Zurich.

Solidar claims that the doubling of salaries in China would result in a price increase of just two cents on a 30-euro toy sold in Europe.

“More than half of the toys that arrive under a Christmas tree in Switzerland were made by factory employees working up to 11-hour days,” Frei said.

Solidar, which referred to an investigation by China Labor Watch, said factory workers can also be exposed to toxic solvents.

The Fair Toys Now campaign will continue in Paris on December 7th with an event organised by ActionAid France.

In an email sent to AFP, Mattel said it was “committed to ensuring that everyone making our toys and our products is treated fairly and with respect and is able to work in a safe and healthy environment.”

The company added: “Our practices in terms of work, health, safety and environment, as well as our monitoring procedures, reflect this commitment.”