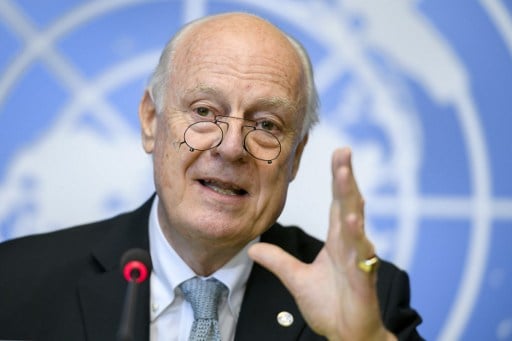 Staffan de Mistura “wishes to announce that it is the intention of the United Nations to convene those negotiations in Geneva on 8th February 2017,” said a statement from his spokesman.

“The Special Envoy believes that it is vital to build on this initial momentum with further steps,” the spokesman said, referring to the council unanimously adopting a resolution to monitor evacuations from Aleppo.

The measure tasks the United Nations with carrying out “adequate, neutral monitoring and direct observation on evacuations from eastern Aleppo and other districts of the city.”

Diplomatic efforts — including several rounds of peace talks in Geneva — have failed to make progress in resolving the conflict, which reached a turning point last year when Russia launched an air war in support of President Bashar al-Assad.

Since the failure of the last round of discussions in April, de Mistura has announced several resumptions of the talks.

The spokesman said de Mistura “will follow with interest” the meeting planned for Tuesday in Moscow between Russia, Turkey and Iran.

“He welcomes any effort that can bring about a cessation of hostilities,” in the conflict that has killed more than 310,000 people in nearly six years, he added.

However that meeting is likely to be a fraught affair as it comes just a day after the Russian ambassador to Turkey was shot dead in Ankara.