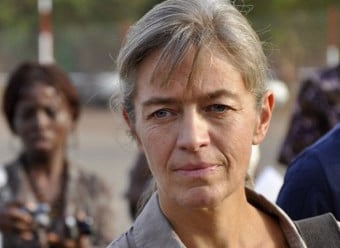 Beatrice Stockly in 2012. Photo: Ahmed Ouoba/AFP
The Al-Qaeda in the Islamic Maghreb (AQIM) video, which lasts two minutes and 17 seconds, was posted on social media sites Telegram and Twitter, according to SITE.
In the clip a woman whose head is covered by a black veil identifies herself as Stockly. She says the date of the recording is December 31st 2016, and that she has been held hostage by AQIM for 360 days.
She spoke in French, with her weary voice barely audible and her face blurred out.
Stockly greeted her family and thanked the Swiss government “for all the efforts they have made.”
“I am in good health,” she added.
In late January 2016, AQIM claimed responsibility in a video for Stockly's kidnapping, which it said took place on January 7th.
The group said it would free her in exchange for a number of AQIM fighters jailed in Mali and one of their leaders held in The Hague.
Switzerland has demanded her release without conditions.
AQIM released a second similar video in mid-June aimed at proving she was still alive.
Stockly, who is in her 40s, is a Christian missionary who was previously abducted by jihadists in northern Mali's Timbuktu in 2012.
On that occasion, she was freed about two weeks later, and opted to keep living in Mali.