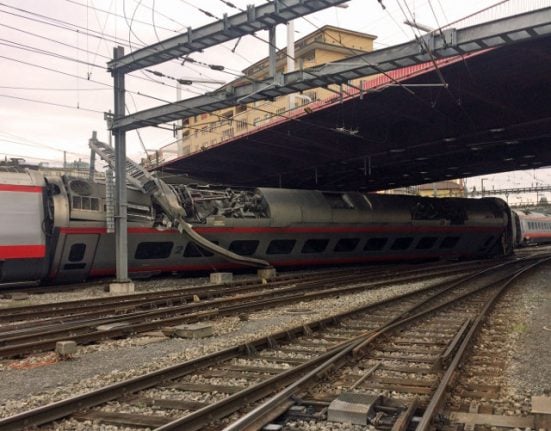 Photo: Lucerne police
Seven people were injured when two train carriages of a Eurocity service came off the tracks just before 3pm on Wednesday.
All 160 passengers were able to leave the train independently, according to Lucerne police, however five people were taken to hospital suffering from bruises and abrasions.
According to local paper the Luzerner Zeitung, work started on Thursday morning to remove the train and carry out repairs to the tracks.
An SBB spokesperson told the paper that there appeared to be more damage to the tracks than initially thought.
Train services from Lucerne were suspended after the crash and continue to be on Thursday, with bus replacement services running on many routes, said Swiss federal railways (SBB).
The disruption is likely to last until at least 4am on Friday morning.
Zentralbahn services are unaffected, however.
The cause of the accident is subject to ongoing investigations, said police.
For up to date information on train services visit sbb.ch or call the free hotline on 0800 99 66 33.