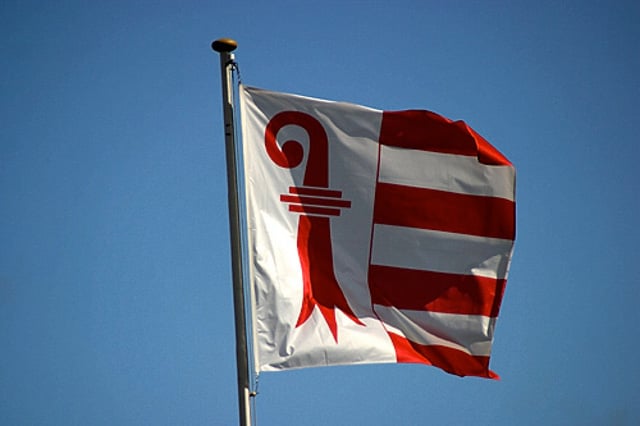 The flag of the canton of Jura. Photo: Wikimedia Commons
When the youngest of Switzerland’s 26 cantons, Jura, was founded on New Year’s Day 1979 it was a huge moment for the passionate separatist movement that had long wished to see the area get its independence.
Prior to that date, seven districts of the French-speaking Swiss Jura mountains fell under the jurisdiction of the canton of Bern, ever since they were given to the German-speaking canton at the Congress of Vienna in 1815, borne out of the reshuffling of Europe after the fall of Napolean.
However increasing discontent among those districts led to the birth of a separatist movement after the second world war which aimed to fight to create an independent state of Jura.
“There were certain claims that those [Jura] areas weren’t very well treated by the canton of Bern,” says Dick Marty, the president of the Assemblée Interjurassienne (AIJ), created in 1994 to help ease ongoing tensions.
He points to one significant event that really kickstarted hostilities between the historic Jura region and the Bern cantonal authorities.
“There was a minister in the Bern government who came from the Jura. He should have been put in charge of the department of public works – roads, infrastructure etc. The German-speaking majority said ‘oh but it’s far too important to let a French speaker have it’,” Marty tells The Local. “That was naturally considered a very serious offence and that fuelled the Jura question.”
Tensions ran high in the 1960s and 70s, with a number of separatist groups carrying out both non-violent and occasionally violent political actions, such as blockading roads, occupying embassies and setting fire to farms – though there were no victims.
“There were bars that were separatist and bars that were anti-separatists and people didn’t mix,” says Marty. “There was a very partisan atmosphere. There were families that were completely divided, families that didn’t talk to each other because some were separatist and some were anti-separatist.”
Eventually the authorities looked for a democratic solution, holding a series of referendums at communal, cantonal and federal level that ultimately resulted in the creation of a new canton of Jura in 1979.
But importantly, only three of the then seven districts in the historic Jura area voted to join the new canton, with the others opting to stay with Bern (one, Laufen, later chose to join Basel-Land).
Why? Marty cites religion, since the three that stayed with Bern were predominantly Protestant areas, while the ones that chose to leave were traditionally Catholic.
Although religion wasn’t as prominent in life as it once would have been, it had left a cultural legacy that may have accounted for the difference in opinion, says Marty.
“Today I think it’s no longer really a question of religion, but probably there is a cultural heritage that remains, that was permeated by religion but today doesn’t have a religious character at all,” he explains.
As a result, the creation of canton Jura wasn’t the end of the story as far as the separatists were concerned.
“The idea of separatists was to have all the Jura in the new canton. When the three districts of the north became the new canton they said ‘but this isn’t finished, we must have the other districts come with us’.” Moutier will vote in June. Photo: Moutier commune
Activism lessened but remained. In 1984 separatists infamously stole the 83kg Unspunnen stone, traditionally used for stone-throwing competitions during the traditional Swiss Unspunnen festival held every 12 years. It was only returned 17 years later.
More seriously, in 1993 a young separatist was killed when preparing a bomb, an incident that shocked the area into creating the AIJ, set up to help resolve the ongoing ‘Jura question’.
The AIJ’s work finally resulted, in 2013, in another consultative referendum across the region on the potential creation of a new canton to unite the Jura districts. Though the existing canton of Jura supported the idea, the Jura bernois (as the Jura districts in canton Bern are known) voted against it, once again stating their preference for the status quo.
However there was one exception – the Jura bernois village of Moutier, where 55 percent voted in favour of the idea.
And it’s that which has led to this latest referendum on June 18th in which Moutier’s residents will again go to the polls, this time in a binding vote to decide if the town should leave Bern and join the existing canton of Jura.
Will they vote to leave? Though the majority of the members of Moutier’s communal council are separatist, it’s difficult to know if the population will make the leap, says Marty.
“There will naturally be a lot of personal questions that will play a role, there is a hospital involved, jobs that depend on the canton of Bern, and also perhaps people have fears,” he says.
Whatever happens, the Moutier vote marks the end of the road for the AIJ which will be disbanded, having achieved its goal of allowing the people to vote on the issue and therefore considering the ‘Jura question’ to be resolved… at least, until the next generation.
TIMELINE
1815 – Jura districts given to Bern at the Congress of Vienna.
1949 – Jura separatist movement begins
1962 – Jura youth separatist group Belier forms to fight for the creation of a sovereign state formed of all the Jura territories, part of the Swiss confederation.
1974 – The seven Jura districts vote in favour of creating a new Jura canton. The idea is later approved at federal level in a 1978 federal referendum.
1975 – The Jura districts vote to decide if they wanted to be part of the new canton. Three districts say yes and four, including Moutier, opt to stay with Bern. Laufen later joins Basel-Land.
1979 – Jura canton is created.
1984 – Separatists from the Belier group steal the Unspunnen stone.
1994 – The Assemblée Interjurassienne (AIJ) is created to help resolve the conflict.
2001 – The three remaining Jura districts in Bern canton become known as Jura bernois
2013 – In a November referendum a strong majority (72 percent) vote against creating a new canton to unite the Jura, apart from the village of Moutier, where 55 percent vote in favour.
2017 – Moutier will decide if it should join canton Jura.
READ ALSO: Ten things you need to know about the Swiss political system