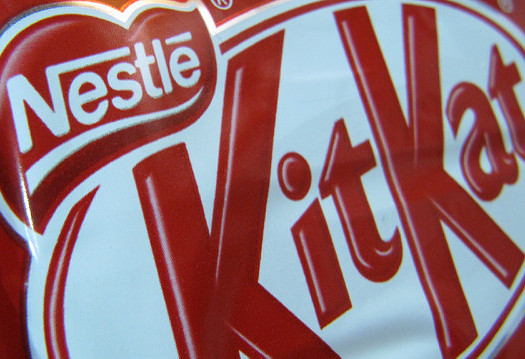 Photo: Howard Lake
The country's Court of Appeal ruled that the chocolate treat — created in 1935 and marketed with the slogan “Have a Break, Have a Kit Kat” — is not distinctive enough in shape to warrant a trademark.
Nestle had argued that the shape of the famous snack was iconic and deserved protection.
The development is the latest twist in Nestle's long-running legal battle with bitter US rival Mondelez International, maker of Cadbury chocolate.
Nestle had launched the appeal after London's High Court had ruled against them in January 2016.
“Nestle is disappointed by the Court of Appeal judgment and is considering next steps,” the Swiss firm said in a statement.
“This judgment does not mean that our four finger-shape is now free for use in the UK or elsewhere.”
The trademark was registered in many other countries including Australia, Canada, France, Germany and South Africa, according to Nestle.
Mondelez said in a separate statement that it was “pleased” with Wednesday's ruling.
“As we have previously stated, we do not believe the shape of the Kit Kat bar should be protected as a trademark in the UK,” it said.
Nestle had also failed in September 2015 to get the EU's top court, the European Court of Justice, to let it trademark the shape of the Kit Kat in Britain.
Mondelez last year showed its disregard for another distinctively shaped chocolate bar when it changed the shape of the classic Toblerone bar in the UK.
Chocolate fans were outraged when the US company, which owns the once-Swiss bar, created bigger gaps between Toblerone's 'mountains' in order to reduce the weight of the bar, citing higher costs.
The decision caused a storm on social media, with commenters saying “it's just not the same product”.