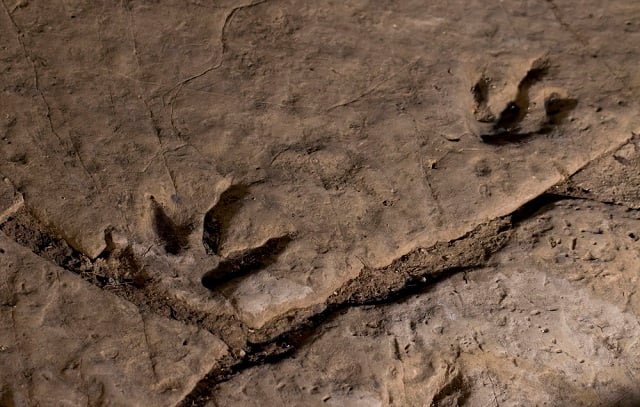 The creature, which roamed the area around 150 million years ago, has been baptized Jurabrontes curtedulensis.

Its tracks were “among the largest worldwide”, the team of paleontologists behind the find said in a study in the Historical Biology journal, in which they classified the dinosaur as a carnivorous bipedal tetropod, meaning it had four limbs but walked on its two back legs.

The researchers stressed that the Jurabrontes was a new and distinct ichnospecies, rather than a new example of a previously known group.

Paleontologists stumbled across its footprints during construction work on the A16 motorway across the Jura mountains which was finished earlier this year.

These works, financed by the Jura canton and the Swiss Federal Roads Office, uncovered more than 14,000 dinosaur prints of varied size from five to 80 cm long; the largest of these belonged to the Jurabrontes.

The owners of the formidable feet would have grown to a length of between ten and 12 metres – in other words, not far off the size of a Tyrannosaurus Rex. Because of the rarity of the prints, paleontologists believe the beast was near the top of the food chain.

Fossilized tracks of much smaller dinosaurs were found close by those of the Jurabrontes, separated by layers of earth measuring 10-20 cm, suggesting that they lived at a similar time.

This means the smaller creatures “were exposed to a severe predation risk hazard in an open, flat and easily-overviewed tidal flat environment with little or no vegetation cover,” researchers said in the final conclusions of the report.

The find is particularly significant because remains of large or giant dinosaurs are rare in the Jura Mountains and in Central Europe in general, and the ones found during the motorway construction were particularly well preserved.

The paleontologists' discover suggests both that the giant predators were more widespread in the Late Jurassic era than previously thought, and that the dinosaurs made use of a migratory corridor between Spain's Meseta Central and the Massif Central in central-southern France.