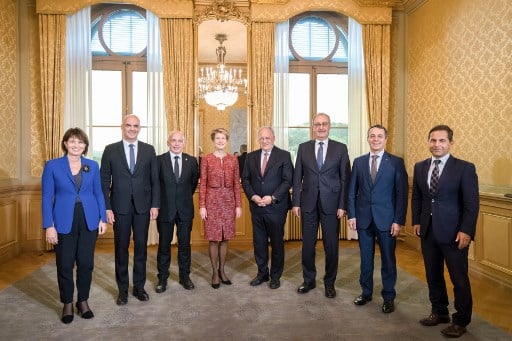 The outcome of Wednesday’s vote won widespread approval, especially in Cassis’ native canton of Ticino, which has not been represented in the federal government since 1999.

But there was disappointment in the west of Switzerland over the failed candidacies of French-speaking Isabelle Moret and Pierre Maudet.

The Corriere del Ticino was jubilant. “We’ve done it; Ticino is back in the Federal Council,” it proclaimed.

24 heures was less gracious, saying on its website that while Ticino had been served by the election of Cassis, it was now time to think about the rest of Switzerland.

For Le Temps, Italian-speaking Switzerland had a legitimate claim to the seat left vacant by outgoing Foreign Minister Didier Burkhalter.

The German-language Blick said the seven-member cabinet was now “perfect” as it comprised four German Swiss, two French Swiss and one Italian Swiss.

The Neue Zürcher Zeitung described Cassis as a “clever choice” while the Luzerner Zeitung and St Galler Tagblatt went one further and said Cassis was “the only right choice”.

For their part, the Tages-Anzeiger and Bund online editions commented that it was important for the country to show more than just lip service to respect for minorities.

Cassis, a 56-year-old Liberal-Radical MP and former doctor, won a convincing victory over his two rivals.

Born in Ticino to Italian parents, Cassis is the first member of the Federal Council not to have had Swiss citizenship at birth.