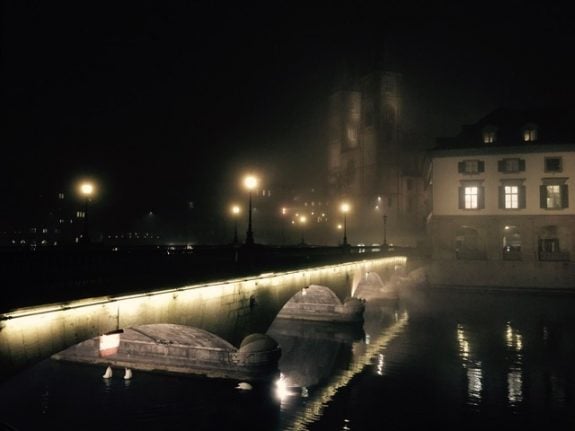 Find out about the ghost of a scarf-obsessed man on a Zurich Ghost Walk. Photo: Dan Dent
The Val Sinestra hotel, Graubünden
Photo: Maarten Smit/Wikimedia Commons
Situated near Scuol in the Engadine valley, the Val Sinestra was built in 1912 to take advantage of nearby mineral springs. The imposing spa hotel drew in tuberculosis patients from around the world. One of those patients, a Belgian who took up residence in 1927 apparently became so attached to it that he is said to still haunt its corridors. Hotel employees have become used to 'Hermann', who is regularly seen or heard around the building.
Medium Andreas Meile has visited the hotel on numerous occasions and is on good terms with the mischievous spirit, who has been known to operate the lift and open windows as the mood takes him. According to Meile, the Belgian had been in love with a member of staff who complained about being mistreated by the hotel managers. Now he roams the hotel checking up on the staff. “He always sends a clear message to the management: treat the staff well and I will treat you well,” Meile told The Local.
Belchen tunnel, Basel-Land/Solothurn
A more modern ghost story is attached to this motorway tunnel in northern Switzerland. Reported sightings of a ghostly hitchhiker – a very pale woman – began in the early 1980s. In 1983 two law students claimed to have picked up the woman at the tunnel entrance. She told them she was unwell and that something terrible was going to happen. As they were driving through the tunnel the woman suddenly vanished. Very shaken up, the students went to a nearby hostelry where they recounted the story to the couple that ran it. As recently as two years ago the couple told Swiss television they were sure the students hadn’t made the story up. However, there have been no recent reported sightings of the 'white woman'.
Lenzburg castle, Aargau
Photo: Mattias Hill/Wikimedia Commons
Dating back to the 12th century, this castle is one of the oldest in Switzerland. Of the various legends and ghost stories linked to the castle, the most commonly told is of the haunted bell tower. The bell is said to ring out at a full moon, even if there’s no one at the castle.
Junkerngasse 54, Bern
The medieval alleyways of Bern’s Old Town are a perfect haunting ground for restless spirits. So much so that the city offers regular ‘Spooky Bern’ guided tours, with roughly one a month in English. With Halloween already booked out, the next English tour is on November 11th.
By far the creepiest house in Bern is situated on Junkerngasse 54. Unoccupied for decades, the narrow building is said to be haunted by a woman dressed in black who sometimes appears at a window. In the 1990s a team of journalists from Swiss Radio International (now Swissinfo) visited the house, accompanied by a parapsychologist.
“We came for the night and camped down on the floor with sleeping bags. We were expecting to feel a presence of some kind but I was quite disappointed because I felt nothing,” recalls Gillian Zbinden, with Swiss Radio International at the time. “All through the evening we were ready and hoping. In fact, in the end I had a really good and deep sleep. The only thing that could have been unusual is that I kept thinking of trees and trees being cut down. Why? I just don't know. Maybe the ghost was trying to tell me something.”
Spiesshof, Basel
Photo: Grubyak/Wikimedia Commons
This Renaissance building from the 16th century has reportedly been haunted for 450 years by the ghost of David Joris – a Dutchman who was given sanctuary in Basel as a religious refugee, led a Dutch colony there and became very wealthy. After his death when it was discovered he had actually belonged to a banned Anabaptist sect, his body was exhumed and the head cut off. The ghost of a headless man accompanied by two black dogs is said to roam the building.
Medium Andreas Meile visited the Spiesshof last year with a reporter and made contact with the spirit of Joris – whose head was back on his shoulders. “He told me he would not leave until he was rehabilitated by the authorities,” Meile says.
Moudon jail, Vaud
It doesn’t get much spookier than dank and dingy prison cells, and the town of Moudon in the canton of Vaud is offering a Halloween Ghost Tour on October 28th that promises to uncover the darker side of the medieval town, ending up at the ancient prison. “Survivors” of the two-hour walk are promised a warming bowl of pumpkin soup.
Gotthard Sanatorium, Ticino Photo: Wendolin Jacober/Wikimedia Commons
From its appearance on a mountainside near Piotta, it’s easy to believe that this imposing building is haunted. Abandoned for decades, it is now in a state of decay. Built in 1905, for 45 years the five-storey building with its own morgue was used to treat war wounded, then tuberculosis patients. People report hearing strange noises emanating from within and other strange phenomena. A contributor to a forum for the paranormal reported a huge force had driven his car back as he approached the sanatorium.
Zurich Old Town
Dan Dent, who runs the Ghost Walk of Zurich, tells the story of a man called Hans von Staffel who lived in Kaminfegergasse. He became obsessed with scarves and wore more and more of them throughout his life, one on top of another. His ghost has reportedly been seen many times: a strange, wide figure shuffling along narrow alleyways.
“In 12 years of the tour, I have never seen it, but on some nights when I tell his story and I’m wearing a scarf, I feel as if an extra pair of eyes is watching me from the back of the crowd,” Dent told The Local.
His tours, in English, take place every Friday. In addition, there is a Halloween tour on Tuesday October 31st at 8pm.
Chillon castle, Vaud Photo: Gervasio Varela/Flickr
A medieval fortress on the shores of Lake Geneva, the atmospheric Chillon castle claims to house the ghost of Agnès de Faucigny, a duchess and member of the house of Savoy. In 2014, a team of paranormal investigators attempted to summon the spirit, playing 13th century music in the hope it would entice her out of hiding. Although they noticed a sharp drop in temperature in the armaments room and heard footsteps on the floorboards above their heads, the team did not see the ghost with their own eyes.