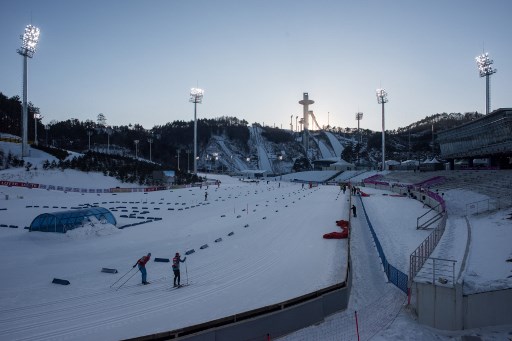 One of the venues for Pyeongchang 2018. Photo: Ed Jones/AFP
North Korea, which boycotted the 1988 Summer Games in Seoul, will send its athletes to the Winter Games in the South, the rivals announced earlier on Tuesday after their first formal talks in more than two years following high tensions over Pyongyang's nuclear weapons programme.
“These proposals mark a great step forward in the Olympic spirit,” said Bach.
The IOC will now wait for the “official reports and the official proposals from the Tuesday meeting”, an IOC spokesperson said.
“The IOC will then discuss these proposals in particular as far as the participation, the number and names of athletes from the NOC of DPRK, and the format of their participation (flag, anthem, ceremonies, etc.) are concerned.
“We will continue to have these discussions in a positive and constructive way. Following this consultation, the IOC EB (executive board) will take the relevant decisions.”