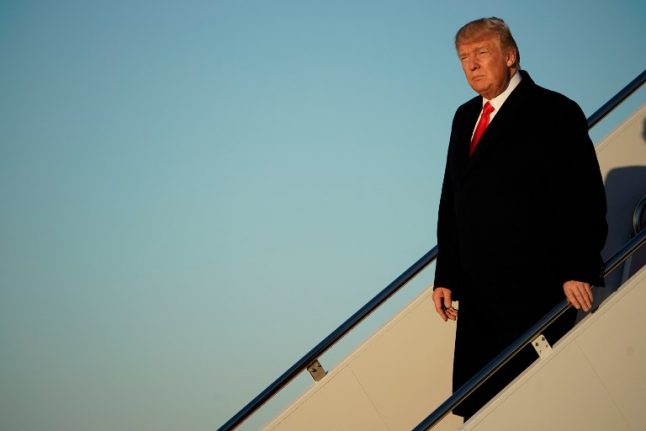 US President Donald Trump shown arriving at Andrews Air Force in Maryland on Thursday. Photo: MANDEL NGAN / AFP
Having whipped up working-class resentment of the global elite to devastating effect en route to the White House, the US president's “America First” vision will run headlong into the haughty ambition of the World Economic Forum (WEF) to map out “a shared future in a fractured world”.
The 2017 gathering ended on the same day as Trump was inaugurated, and many of the discussions during the week dwelt anxiously on what his presidency would portend.
China's President Xi Jinping, the star turn in Davos last year, exploited such misgivings to stake out an alternative vision for the international economy with China playing a lead role in both trade and fighting climate change.
A year on, Trump will be closing the conference with a speech next Friday. He is relishing his role as apostate-in-chief bent on demolishing the pieties held dear by the WEF, which is drawing some 70 other leaders along with thousands of delegates drawn from the worlds of industry, finance and show business, plus protestors opposed to the US president.
The property mogul's final election campaign advertisement of November 2016 made the distinction brutally clear, casting himself as the defender of hard-working Americans against “global special interests”, over images of Davos perennials such as financier George Soros and Goldman Sachs chief Lloyd Blankfein. Both are Jewish, and the ad was assailed as anti-semitic by critics.
Best behaviour?
So why consort in the Swiss Alps with people who are hate figures to his political base?
In a recent interview with The Wall Street Journal, Trump said part of his motivation in becoming the first US president to attend Davos since Bill Clinton in 2000 was to be an unabashed “cheerleader for the country”.
Trump also pointed to quickening US economic growth and a roaring stock market as reasons to cheer when he and a large part of his cabinet join leaders such as French President Emmanuel Macron, Indian Prime Minister Narendra Modi and Brazilian President Michel Temer in Switzerland.
On Monday, the International Monetary Fund (IMF) will present in Davos an updated overview of the global economy, which is indeed expanding at a broad and healthy clip. But ahead of the meetings, a WEF survey of nearly 1,000 experts and decision-makers underlined growing anxiety about the risks of environmental disaster and armed conflict — not least involving North Korea and the United States, after months of bellicose rhetoric from Trump.
Douglas Rediker, a senior fellow at the Brookings Institution in Washington who was appointed by Trump's predecessor Barack Obama to the IMF's executive board, said there was no way to reconcile the WEF's globalist outlook and the Trump dogma.
“It will be a jarring visit even if the president is on his best diplomatic behaviour. And that's a big if,” Rediker said.
Davos Woman
Trump will be running up against internationalist foils in Davos this week such as German Chancellor Angela Merkel and Macron, who has subverted one of the US president's signature lines with his own motto of “Make our planet great again”.
The organisers, mindful of the globe-trotting but all-male caricature of “Davos Man”, are also keen to extol their efforts to promote representation by women, as sexual harassment and the gender pay gap move up the political agenda worldwide.
“Davos Women” will account for 21 percent of the total number of delegates this year, the highest ever proportion, if still relatively meagre. They include IMF chief Christine Lagarde, IBM head Ginni Rometty and screen star Cate Blanchett.
Cue another clash of visions given the presence of Trump, whose election campaign in 2016 was nearly upended late on by a leaked recording in which he boasted of groping women.
And there will be no shortage of movers and shakers from Africa in attendance, should the president wish to explain his recent reported dismissal of countries across Africa as “shitholes”.
The politicians will join the chiefs of some 1,900 companies to debate a panoply of issues such as the future of work in an age of automation and artificial intelligence, tackling “the next pandemic”, and leveraging the potential of virtual currencies.
Yet there is no escaping the long shadow cast over the week by Trump, as the convention-shredding president bids to make good on his Davos-baiting promises.
WEF founder Klaus Schwab is not giving up hope.
“No country alone, no stakeholder alone, no individual alone, can solve the issues on the global agenda. No issue can be solved in an isolated way,” he said.
By AFP's Jitendra Joshi