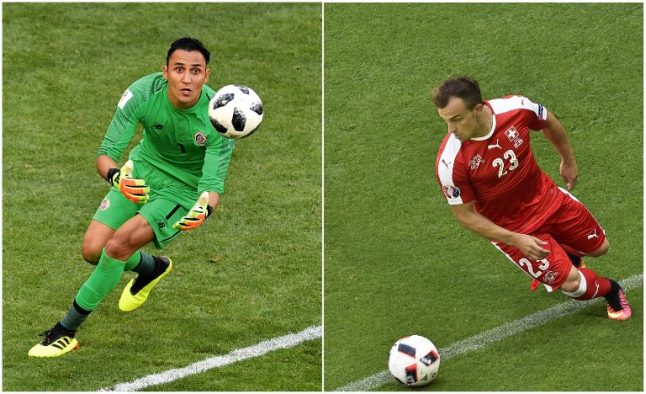 All eyes may be trained on Brazil's potentially explosive match against Serbia on Wednesday, but at the same time Switzerland have the opportunity to secure their place in the last 16 and even top Group E.

A win, or even a draw, for the Swiss against an already eliminated Costa Rica would book their ticket in the knockout stages.

A big victory could mean them taking the group and potentially setting up a clash with Germany in the last 16, providing the stuttering World Cup holders emerge from Group F.

And if Brazil beat Serbia, the Swiss will go through even if they lose to Costa Rica.

But although their progress on the pitch has been smooth – a creditable 1-1 draw with Brazil, followed by an exhilarating win over Serbia – off the field it has been anything but easy.

On Monday the threat of a two-match suspension against three of their most influential players – Xherdan Shaqiri, Granit Xhaka, and Stephan Lichtsteiner – was lifted.

Shaqiri and Xhaka scored against Serbia in the 2-1 win and both celebrated by making a “double eagle” gesture with their hands to represent the Albanian flag.

Lichtsteiner was also charged after joining in with the celebration.

Instead of a ban for a political gesture, which would have kicked in for the Costa Rica match, FIFA fined the trio for “unsporting behaviour”.

Shaqiri and Xhaka are ethnic Albanians with roots in Kosovo, a former province of Serbia which has declared independence, a move not recognised by Belgrade. Thousands were killed and displaced in Kosovo in the late 1990s during a bitter conflict between Serbian forces and ethnic Albanian fighters.

Kosovo has an ethnic Albanian majority, and many identify with the Albanian flag, which the double eagle symbol represents.

Shaqiri was born in Kosovo to Kosovar Albanian parents in 1991 and his family emigrated to Switzerland a year later.

Xhaka was born in Switzerland after his family moved there from Kosovo. His older brother, Taulant, also a professional footballer, chose to play for Albania.

Shaqiri, who netted the winner on a febrile night against Serbia in Kaliningrad, has scored or provided an assist for four of the last five Swiss World Cup goals.

The controversy is unusual for Switzerland, who usually fly under the radar at World Cups, and are marshalled by ex-Lazio coach Vladimir Petkovic, himself born in the former Yugoslavia.

Win their next two matches and the team, which was sixth in the Fifa rankings before the tournament, will be the first Swiss side to get past the last 16 stage since hosting the World Cup in 1954.

For the Costa Ricans, Nizhny Novgorod represents a last chance at redemption at this World Cup after their heroics saw them reach the quarter-finals in 2014.

This time round Oscar Ramirez's side have failed to register a point or score a goal.

Only at the 2006 World Cup have they previously managed not to take a point from their three group games.