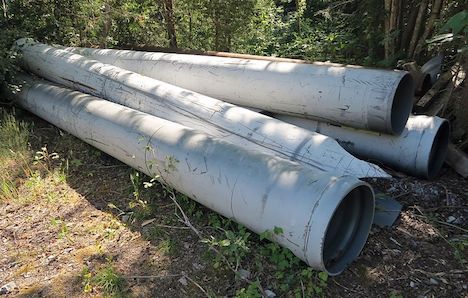 Cast iron pipes on the site of the reconstructed plant in MItholz Photo: Kecko/Wikimedia Commons

Some in the village near the ski resort of Kandersteg are old enough to remember a powerful explosion in 1947 that cost nine residents their lives and blew away a section of mountainside.

The defence ministry said on Thursday that experts now believed remnants of ammunition stored underground in Mitholz “posed a greater risk than had previously been thought”.

On the basis of the warning contained in the interim expert report, the government has now commissioned the defence ministry with setting up a working group to carry out further analysis of the risk and determine whether measures need to be taken.

Mitholz was the site of a wartime munitions facility storing 7,000 gross tonnes of munition. It was some of this cache that exploded more than 70 years ago. Although part of the cache was cleared following the explosion, around 3,500 tonnes of munitions and several hundred tonnes of explosives are thought to still be buried under the remains of the infrastructure, the defence ministry said.

Previous assessments made in 1949 and 1986 came to the conclusion that any new explosion would cause minimal damage and that the facility could continue to be used: a military barracks and army pharmacy were also housed in the vicinity.

However, the expert report carried out last year found that the risk of an explosion triggered by an occurrence such as a rockslide in the affected area was higher than had been thought.

The defence ministry said that on the basis of the report there was no need for immediate action to protect the local community.