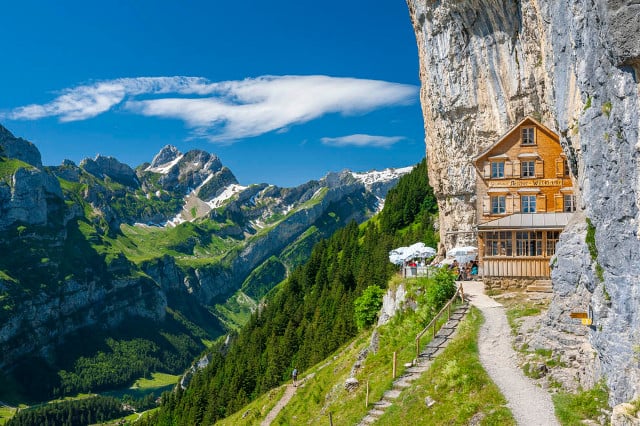 Is the Äscher a victim of its own success? Photo: Aescher Alpstein

Until 2015, the inn, perched on a cliff above the village of Wasserauen in the canton of Apenzell Innerrhoden was pretty much an insider’s secret.

But the Äscher restaurant, which is near the so-called 'Wildkirchli' caves with their prehistoric remains, has now become a hit – largely thanks to the internet.

In 2014, it was named one of the five most interesting restaurants in the world in the Huffington Post and it also received a big boost when the actor Ashton Kutcher posted a much-shared link mentioning the inn on Facebook.

Then the Äscher – a cable car ride and a short walk from Wasserauen – got a huge seal of approval when it featured on the cover of National Geographic’s ‘Destinations of a Lifetime’ special.

It is now a hugely popular destination for Swiss and foreign tourists alike and a Swiss Instagram staple.

The current managers, Nicole and Bernhard Knechtle-Fritsche, took over the restaurant in 2014 and have overseen a huge rise in popularity for the inn.

But they have decided to move on at the end of the current season, on November 1st, according to a statement from Apenzell Innerrhoden.

New tenants will then be sought for the restaurant.

Since the rise in popularity of the location, there have been concerns about the number of visitors.

Back in 2015, Swiss hobby photographer Peter Böhi, the man behind the shot that featured on the cover of National Geographic, said he feared the Äscher could be overrun.

And last year, the current managers decided to stop offering accommodation, saying that the wanted the extra room for them and their three children.

They also said that doing away with accommodation for 35 people would help make the establishment more accessible for locals on weekends.