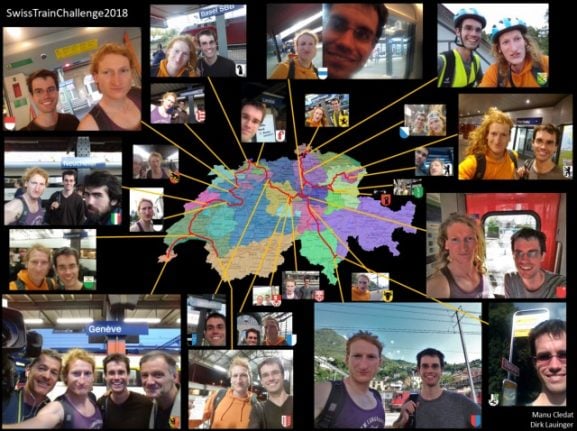 The challenge sees participants trying to visit all of Switzerland’s 26 cantons as quickly as possible using only public transport, and the current record stands at a speedy 17 hours and 19 minutes.

But in a bid to beat that time, Emmanuel Clédat and Dirk Lauinger from Lausanne’s EPFL federal technology institute spent months planning an optimal route.

Read also: Quiz – How well do you know your Swiss geography?

“It was necessary to bring in the heavy artillery,” Emmanuel Clédat told The Local on Tuesday, explaining that he and Lauinger had crunched data on 819,903 possible routes around the country.

The computer took ten days to spit out an answer for them: they could visit all 26 cantons in a record 16 hours and 54 minutes – if all went according to plan and some very tight connections worked out (including four minutes to sprint 200 metres to the canton of Glarus).

In the end though, it was one late train that saw the students’ bid fail.

“We were three hours and ten minutes into the trip when our train from Neuchâtel to Bern had a delay of around 20 minutes,” Cledat explained.

But the students didn’t give up there, even though they knew their attempt to break the record had failed.

They forged on, making it to their final destination of Jakobsbad in Appenzell Innerrhoden in just under 18 hours with all the most problematic connections successfully achieved.

“We now know that it is possible to do the trip in 16 hours and 54 minutes,” said Clédat.

He said he and his fellow traveller had arrived in Jakobsbad “exhausted” but that it had been a great experience.

“It was a lot of fun. People on the train all wanted to know about what we were doing, and they were really supporting us.”

Asked if they were any highlights or places he would particularly recommend in Switzerland, Clédat said that it was the “country as a whole with all of its diversity” that had impressed him.

“All of the cantons are worth visiting,” he said.

The doctoral student said he was now very busy with his studies and didn’t have any plans to do the trip again. But he has also laid down the gauntlet.

The route took months of planning.

“Long story short, the tour of Switzerland 26 cantons in 16 hours and 54 minutes is definitely possible. Who will be the next adventurer to record break this challenge?” he said.

And for those of you wondering how much all that travel ended up costing, Clédat and Lauinger bought one-day travel cards from their local town hall for a cost of 41 Swiss francs (around $41 or €36) each. This ticket option is available to residents of Switzerland but depends on availability on the day you want to travel.