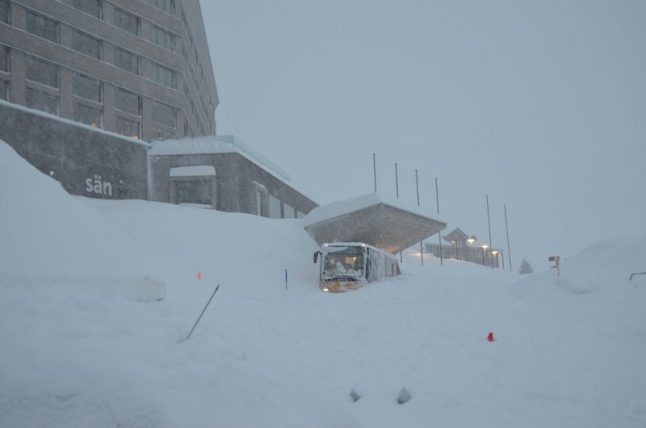 Eyewitnesses said they heard a huge noise before snow piled into the restaurant of the Hotel Säntis. Photo: Kantonspolizei Appenzell Ausserrhoden

Three people were treated for minor injuries after the 300-metre wide avalanche hit the restaurant of the Hotel Säntis in Schwägalp, which lies at the foot of the Säntis mountain in the canton of Appenzell Ausserrhoden.

Around 20 cars were also buried by snow near the hotel which is located next to the Säntis cable car station.

Rescue workers were dispatched to the scene after cantonal police received a report about the avalanche shortly after 4.30pm on Thursday.

A search was immediately launched for people who might possibly have been buried by snow but operations were suspended on Thursday evening because of heavy snowfall and the threat of further avalanches.

That search continued on Friday despite police having received no reports of missing persons. A huge clean-up operation also got underway.

Both the hotel and cable car service are currently closed to the public.

A Swiss Post bus was half buried by the 300-metre wide avalanche. Photo: Kantonspolizei Appenzell Ausserrhoden

At a press conference on Friday, the head of operations for the Säntis Cableway firm, Bruno Vattioni, said it appeared that no one else remained buried by snow from the avalanche. But he stressed it would only be known with any certainty if this was the case after all snow had been cleared away.

“We got off lightly,” said Vattioni.

“We were surprised by the avalanche. An avalanche of these dimensions wasn’t predictable and there has never been one like it during our history.”

The cable car manager added the firm had lot of experience with avalanches but that these were usually on the south side of Säntis mountain, rather than on the north side where the Hotel Säntis is located.

The steep northern face of the Säntis. The cheese dairy pictured was also struck by the avalanche. Photo: Swiss Tourism

“Even the experts couldn’t envisage what happened yesterday,” Vattioni said.

Hanspeter Schoop from the alpine rescue team in nearby Urnäsch was also shocked by Thursday’s events.

“An avalanche like this happens less than every hundred years,” he told Swiss news site 20 Minuten.

According to Benjamin Zweifel with the Swiss Institute for Snow and Avalanche Research (SLF) the avalanche risk above Schwägalp at the time of Thursday’s avalanche was level 4 – the second highest on a five-point scale. That risk has since dropped to level 3.

During a helicopter flight on Friday morning, emergency services personnel were able to establish that the avalanche had originated on the steep north face of the Säntis at an altitude of around 1,900 metres. Schwägalp and the Hotel Säntis are at 1,350 metres above sea level.

Schoop from Urnäsch rescue services said the avalanche had been some 300 metres wide and 1.5 metres high at its point of origin. It had therefore picked up a lot of force as it made its way down the mountain.

He added that avalanches are rare in the Alpstein massif, where the Säntis is located. SLF data shows the former Säntis cable car station suffered avalanche damage in 1942 but that installation was in a different location. Risk assessment was carried out before the new station was built.

On Thursday, an eyewitness told regional daily St Galler Tagblatt that he and his wife had arrived at the Säntis hotel at around 3pm and had gone to the restaurant area to have a beer and read the newspapers.

The couple took a seat by the window and then saw snow swirling around. At first the man thought snow was falling from the roof.

“Then there was a huge noise and snow piled into the back of the restaurant,” he said.

The man, who preferred to remain anonymous, said there were only a few people in the restaurant at the time the avalanche struck. He said he had seen one person with an arm injury and that at least one person needed to be dug out of the snow.