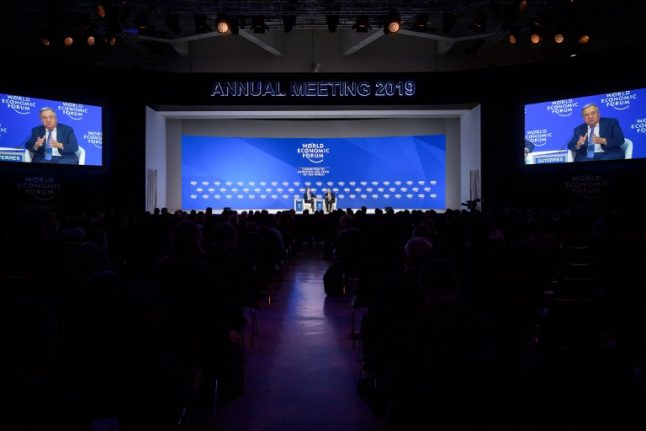 UN Secretary-General Antonio Guterres delivers a speech during the World Economic Forum (WEF) annual meeting in Davos. Photo: FABRICE COFFRINI / AFP
Here are some of the top quotes on key issues over the past week.
Climate emergency
“I am here to say our house is on fire.” — Greta Thunberg, a 16-year-old Swedish teenager whose advocacy against global warming has inspired global youth. She shocked her audience of the business elite in an uncompromising speech on Friday.
“Climate change is running faster than we are. I believe we are losing the race.” — UN chief Antonio Guterres sounds the alarm on global warming at a Davos forum where the business elite faced criticisms of doing too little against the planetary crisis.
“I think people are beginning to realise that there is no business on a dead planet.” — Christina Figueres, founder of the non-governmental organisation Global Optimism.
No-shows
“She will be focused on matters here.” — The spokeswoman for British Prime Minister Theresa May, announcing the embattled leader was missing the forum in order to address the Brexit turmoil rumbling in London.
“What a great headline: Kerry replaces Pompeo.” — Former US secretary of state John Kerry draws a big laugh after a panel moderator thanks him for replacing the current office holder, the right-wing Mike Pompeo, at the last minute due to the government shutdown in Washington.
“New winds are blowing across the world.” — US Secretary of State Mike Pompeo, addressing the Davos audience by video from Washington, celebrating a wave of populist “disruption” across the globe.
Economic slowdown
“The bottom line is that after two years of solid expansion, the world economy is growing more slowly than expected, and risks are rising.” — IMF chief Christine Lagarde draws a gloomy picture of the world economy on the opening day of the forum.
“The number is 6.6 percent. I think this is a pretty significant number. Not low at all.” — Chinese Vice President Wang Qishan shrugs off alarm from the world markets about the state of economic growth in China.
Davos doubts
“When institutions like the World Economic Forum fail to stand up and speak out, they become complicit.” — Amnesty International chief Kumi Naidoo sends a harsh message to Davos for allowing a large Saudi presence without devoting time to the murder of journalist Jamal Khashoggi.
“It's not pessimistic…. It's just a feeling that it won't be so great this year. It is almost dull. I don't understand it. I'm still trying to sort it out.” — Harvard professor Kenneth Rogoff, a Davos regular, says the early days of the forum lacked the same oomph of previous years.
“At Davos, you don't have to kiss the golden calf. I don't do that.” — EU Economics Affairs Commissioner Pierre Moscovici pushes back on talk that attending the forum is to celebrate the rich and powerful.
Venezuela
“Brazil recognises Mr Juan Guaido as Venezuela's interim president.” — Brazilian President Jair Bolsonaro tweets from Davos that his country no longer recognises Nicolas Maduro as Venezuela's leader. Canadian Foreign Minister Chrystia Freeland, also at the forum, expresses her country's “full support” for Guaido.
“Venezuela has a very long road ahead, Venezuela has to be rebuilt, relaunched, rethought, remade.” — Moises Naím, a Venezuelan writer and journalist who was also a minister under the presidency of Carlos Andres Perez.
READ ALSO: Spain, France, Germany give Venezuela's Maduro ultimatum
Royals and celebs
“I'd like to say it's a personal treat for me to be sitting here asking you questions. Normally I have to endure people asking me questions.” — Britain's Prince William cracks an opening joke as he begins an interview with Sir David Attenborough, the celebrated TV naturalist.
“Capitalism is not immoral, it's amoral.” — U2 frontman Bono, a Davos regular, providing his usual dose of rock-n-roll rebellion to the forum's jet set at a panel with Rwandan President Paul Kagame and IMF chief Christine Lagarde.