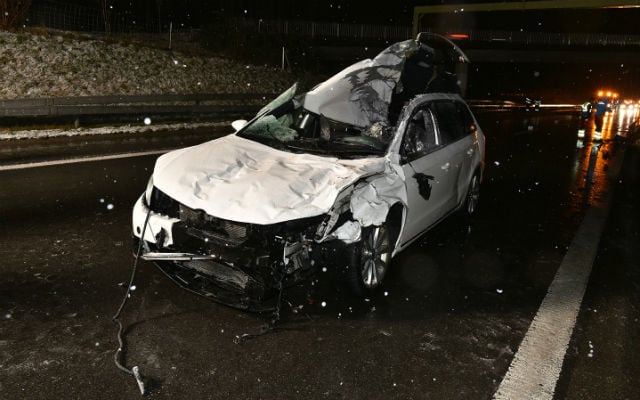 The car that collided with the horses near Wollerau. Photo: KAPO Zurich.

A 53-year-old man died on February 3rd after colliding with two horses on the A3 motorway near the town of Wollerau in the Swiss canton of Schwyz, south of Zurich.

The accident occurred at around 4am yesterday morning, according to a report by the Zurich cantonal police (DE).

Emergency services were unable to revive the driver, who died at the site of the accident. The two horses were also killed on impact. It remains unclear why the horses were wondering across a busy motorway shortly before dawn.

The Zurich police and the public prosecutor in Limmattal-Albis have opened an investigation.

The A3 highway, which links Basel and Sargans (via Zurich), has been the site of several major accidents recently. In December, an Italian woman died and three others were seriously injured after a bus owned by a subsidiary of German company Flixbus crashed at 4.15 am on December 16th. Over 40 people were injured in that accident.

The 61-year-old bus driver died soon after from his injuries, following the December 16th crash.

The figures for early 2018 represent the second lowest accident rate since the government began publishing records every six months 29 years ago, according to data from Switzerland's Federal Roads Office.