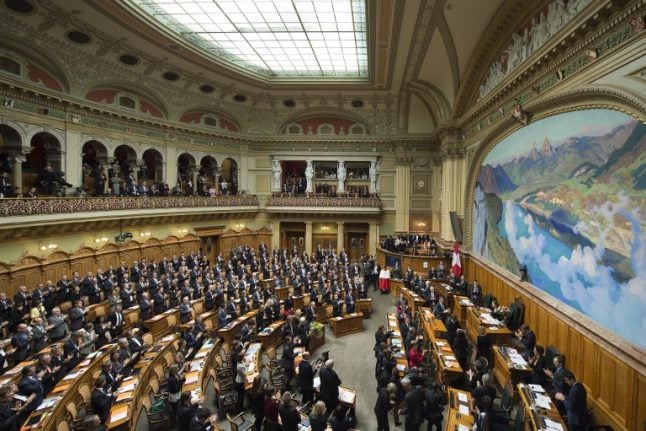 Monday's debate in the Swiss parliament was always going to be about more than €1 billion in funding. File photo: AFP

The latest topic to highlight the ongoing crisis in relations between Switzerland and the European Union is the issue of the €1 billion (1.3 billion Swiss francs) the Alpine country is supposed to pay to help the development of the bloc’s poorer countries.

The payment towards the EU’s so-called Cohesion Fund is part of the price Switzerland is required to pay for access to the all-important EU market. The lion’s share of the money would go towards funding of apprenticeship projects in 13 countries across Eastern and Southern Europe.

Read also: What you need to know about the draft Swiss–EU framework deal

The Swiss government said last September the funding, which is payable over 10 years, would be honoured, and in a normal situation the Swiss parliament would sign off quickly and get on with other business.

But there is nothing normal about Swiss–EU relations at present as the debate in the Swiss lower house of parliament, the National Council, on Monday demonstrated.

In the end, the chamber followed the recent example of the Swiss upper by agreeing to release the funding on the condition that the EU “did not take discriminatory measures against Switzerland”.

However, before a vote on the issue took place, there was plenty of debate over whether the money should be paid at all and, if so, under what conditions.

The elephant in the room was the current stand-off between Bern and Brussels over a deal that aims to set the ground rules for their future relations.

The draft of the so-called framework agreement has been years in the making. It is designed to tidy up relations which are currently based on around 20 main agreements and 100 secondary agreements.

The EU – frustrated by years of protracted talks – has repeatedly said the deal on the table is a done thing and there will be no more talks.

But within Switzerland the draft agreement has been met by a barrage of criticism, with many arguing it is dead in the water. The left argue the proposed deal threatens the country’s high wages by watering down salary protection measures while the right believes the document's legal mechanisms seriously threaten Switzerland’s sovereignty.

Against this backdrop, what was ostensibly a debate on Monday about €1 billion in funding for the EU’s less privileged nations was always going to end up being about Swiss-EU relations in general.

The staunchly anti-EU Swiss People’s Party (SVP) – the largest party in the Swiss lower house – argued, alone and in vain, that it was ridiculous for Switzerland to pay money to the EU in the current circumstances.

Meanwhile, the Foreign Affairs Committee of the lower house also opted for a stronger stance in the face of perceived threats from EU.

It argued the Cohesion Fund money should only be paid if the EU agreed to guarantee Switzerland's continued participation in the Horizon 2020 research program. More critically, it also demanded that Brussels recognise the full 'equivalence' status’ of the Swiss stock exchange on a permanent basis.

This stock market equivalence is crucial as it means EU-based trading platforms can buy and sell Swiss stocks.

Brussels has repeatedly threatened to withdraw this equivalence in a bid to ramp up pressure on Bern to accept the draft bilateral framework agreement. Currently, equivalence is recognised until June.

But the lower house chose to reject these tougher conditions on releasing the €1 billion at stake. Instead, it followed the lead of Swiss foreign minister who called the Cohesion Fund payment an “investment in good relations with neighbours”.

The issue of funding will now go back to the upper house for reconsideration of slight policy differences between the two houses of parliament.