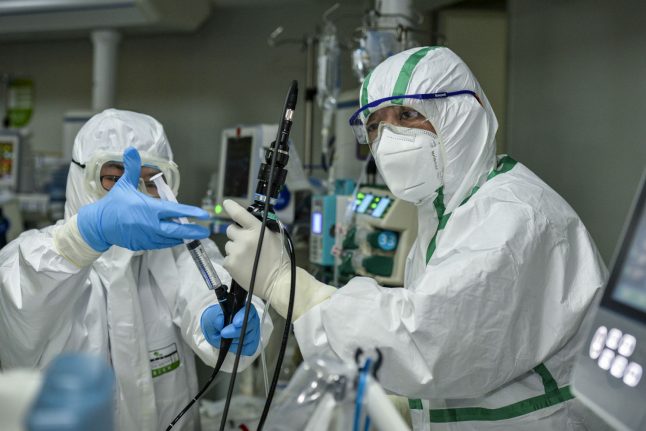 Doctors treat a patient with the coronavirus. Image: AFP

In all, 20 out of Switzerland’s 26 cantons have declared cases of coronavirus with the total on Sunday March 8th standing at 260.

Only Glarus, Nidwalden, Obwalden, Schaffhausen, Uri and Appenzeller-Innerrhoden have yet to register a case of the virus.

On Thursday morning, a woman in the canton of Vaud became the first person to die of the virus.

On Tuesday, the Federal Council has confirmed that there has been a transmission between people in Switzerland for the first time.

Switzerland's 117 confirmed cases place it among the top 20 countries in the world in terms of coronavirus infection.

Two patients, one from Geneva and one from Ticino, have been the first to be released from hospital in Switzerland to have beaten the virus.

France and Germany both have more than 200 confirmed cases, while in Italy there are at least 3,000, with more than 100 deaths.

More than 500 people in Switzerland have so far been tested for Covid-19 and over 100 are in quarantine or isolation.

Among them are 44 kindergarten children and eight teachers from Spreitenbach in canton Aargau, who might have been infected by one of the educators.

Forty-five students and nine teachers in a high school in Biel / Bienne have also been put in isolation over the weekend.

And five employees of the Grand Resort Bad Ragaz were quarantined this weekend after coming in contact with a former guest who later tested positive for the virus in the canton of Zurich; the guest came to Switzerland from Italy.

Last week, the government has banned public events of more than 1,000 people. `

After suspending its flights to mainland China, SWISS is also reducing its services to some Italian desinations. “As a consequence of the Covid-19 coronavirus, SWISS has decided, together with the Lufthansa Group, to reduce its frequencies to and from Italy until the end of March”, the airline announced on its website.