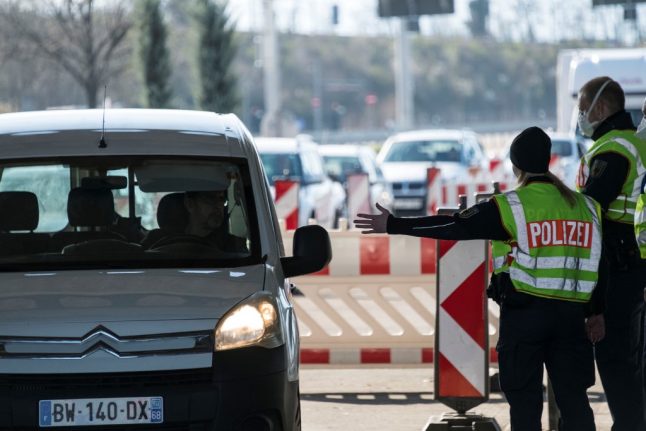 Police monitors the border between France and Switzerland near Basel. Photo by SEBASTIEN BOZON / AFP

Can I still come to Switzerland?

That depends. If you are a Swiss citizen or permanent resident, or you are a cross-border worker with a valid G-permit, then you can still enter the country.

You will also be allowed access if you can prove that you must travel in Switzerland for professional reasons. Transit and transport of commercial (but not private) goods remain authorised as well.

According to the Federal Council, these restrictive measures apply to vehicles, railways, as well as air traffic from Italy, France, Germany, Austria, Spain, and all non-Schengen countries. Liechtenstein is not affected by this measure because it is part of the Swiss customs territory.

In addition, the Federal Council suspended the issuance of Schengen and national visas to third-country nationals for a period currently set at three months. These people may only enter Switzerland in exceptional cases.

Examples of such exceptions include family members of Swiss citizens or permanent residents, or specialists in the medical field.

Given these stringent measures, tourists or random visitors are no longer permitted to enter Switzerland.

Why have such strict regulations been implemented?

The Federal Council decided to limit access into Switzerland in a bid to stop the spread of coronavirus from other infected countries.

To date, Switzerland has registered some 3,800 cases of COVID-19, including 33 deaths, making the small Alpine country of 8.5 million people one of the hardest-hit by the pandemic compared to its population size.

“These measures aim to protect the Swiss population and maintain the capacities of the Swiss health system”, authorities said.

This all the more important since at present only around 160 intensive care beds out of 800 remain free, as demand is expected to soar.

Where is the border traffic the heaviest?

Most of the traffic is at border crossings between Italy and Ticino, and France and Geneva. Both cantons have a high number of frontalier workers who commute to their Swiss jobs every day.

In total, 85,000 French citizens work in Geneva, making up 60 percent of the personnel at the canton’s university hospital (HUG).

And 67,800 Italian employees make up more than a quarter of the total workforce in Ticino. Some 4,000 are employed in the canton’s health sector.

What is the current situation at Switzerland's borders?

In total, 130 border crossings between Switzerland and Italy, France, Germany, and Austria, had been totally or partially closed.

With border closures and strict controls now under way, bottlenecks slow down the traffic at all entry points.

To remedy the situation, Geneva authorities are issuing special ‘priority’ stickers to health care workers to allow them faster transit through customs.

Due to tight border restrictions, around 11,000 people had been refused entry to Switzerland in recent days, said Christian Bock, the head of the Swiss customs.

What is happening at airports?

The situation at international airports in Zurich, Geneva and Basel is calm, as many flights to and from Switzerland have been cancelled.

Passengers on flights that do land are submitted to the same strict rules as those arriving by land. Those who do not meet entry requirements (see above) and are denied entry are accompanied to a transfer desk, “with the responsibility for covering the return flight falling on the airline involved”, according to swissinfo.